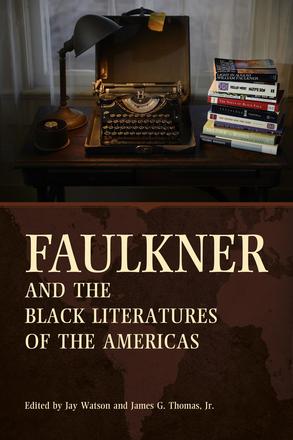 At the turn of the millennium, the Martinican novelist Édouard Glissant offered the bold prediction that “Faulkner’s oeuvre will be made complete when it is revisited and made vital by African Americans,” a goal that “will be achieved by a radically ‘other’ reading. ” In the spirit of Glissant’s prediction, this collection places William Faulkner’s literary oeuvre in dialogue with a hemispheric canon of black writing from the United States and the Caribbean. The volume’s seventeen essays and poetry selections chart lines of engagement, dialogue, and reciprocal resonance between Faulkner and his black precursors, contemporaries, and successors in the Americas.

In addition, five contemporary African American poets offer their own creative responses to Faulkner’s writings, characters, verbal art, and historical example. In these ways, the volume develops a comparative approach to the Faulkner oeuvre that goes beyond the compelling but limiting question of influence—who read whom, whose works draw from whose—to explore the confluences between Faulkner and black writing in the hemisphere.