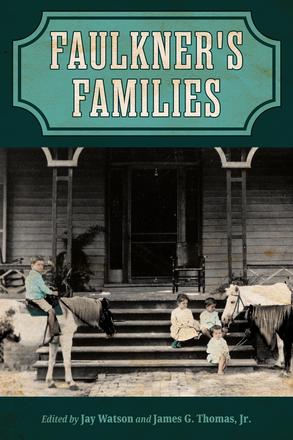 If it seems outrageous to suggest that one of the twentieth century’s most important literary cartographers of the private recesses of consciousness is also among its great novelists of family, William Faulkner nonetheless fits the bill on both counts. Family played an outsized role in both his life and his writings, often in deeply problematic ways, surfacing across his oeuvre in a dazzling range of distorted, defamiliarized, and transgressive forms, while on other occasions serving as a crucible for crushing forces of conformity, convention, and tradition. The dozen essays featured in this collection approach Faulkner’s many families—actual and imagined—as especially revealing windows to his work and his world.

In Faulkner's Families, contributors explore the role of the child in Faulkner’s vision of family and regional society; sibling relations throughout the author's body of work; the extension of family networks beyond blood lineage and across racial lines; the undutiful daughters of Yoknapatawpha County; the critical power of family estrangement and subversive genealogies in Faulkner’s imagination; forms of queer and interspecies kinship; the epidemiological imagination of Faulkner’s notorious Snopes family as social contagion; the experiences of the African American families who worked on the writer’s Greenfield Farm property; and Faulkner’s role in promoting a Cold War–era ideology of “the family of man” in post–World War II Japan.