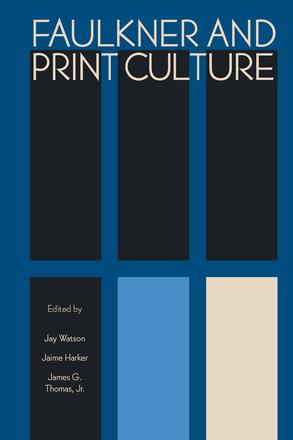 William Faulkner's first ventures into print culture began far from the world of highbrow New York publishing houses such as Boni & Liveright or Random House and little magazines such as the Double Dealer. With that diverse publishing history in mind, this collection explores Faulkner's multifaceted engagements, as writer and reader, with the US and international print cultures of his era, along with how these cultures have mediated his relationship with various twentieth- and twenty-first-century audiences.

These essays address the place of Faulkner and his writings in the creation, design, publishing, marketing, reception, and collecting of books; in the culture of twentieth-century magazines, journals, newspapers, and other periodicals (from pulp to avant-garde); in the history of modern readers and readerships; and in the construction and cultural politics of literary authorship.

Several contributors focus on Faulkner's sensational 1931 novel Sanctuary to illustrate the author's multifaceted relationship to the print ecology of his time, tracing the novel's path from the wellsprings of Faulkner's artistic vision to the novel's reception among reviewers, tastemakers, intellectuals, and other readers of the early 1930s. Other essayists discuss Faulkner's early notices, the Saturday Review of Literature, Saturday Evening Post, men's magazines of the 1950s, and Cold War modernism.