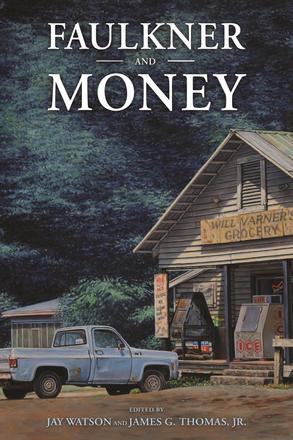 The matter of money touches a writer's life at every point—in the need to make ends meet; in dealings with agents, editors, publishers, and bookstores; and in the choice of subject matter and the minutiae of imagined worlds. William Faulkner's Yoknapatawpha was no exception. The people and communities he wrote about stayed deeply entangled in personal, national, and even global networks of industry, commerce, and finance, as did the author himself. Faulkner's economic biography often followed, but occasionally bucked, the tumultuous economic trends of the twentieth century. The Faulkner met within these pages is among modern literature's most incisive and encyclopedic critics of what one contemporary theorist calls the madness of economic reason.

Faulkner and Money brings together a distinguished group of scholars to explore the economic contexts of Faulkner's life and work, to follow the proverbial money toward new insights into the Nobel Laureate and new questions about his art. Essays in this collection address economies of debt and gift giving in Intruder in the Dust; the legacies of commodity fetishism in Sanctuary and of twentieth-century capitalism's financial turn in The Town; the pegging of self-esteem to financial acumen in the career of The Sound and the Fury's Jason Compson; the representational challenges posed by poverty and failure in Faulkner's Frenchman's Bend tales; the economics of regional readership and the Depression-era literary market; the aesthetic, monetary, and psychological rewards of writing for Hollywood; and the author's role as benefactor to an aspiring African American college student in the 1950s.