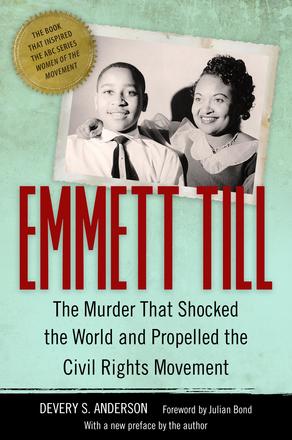 Emmett Till: The Murder That Shocked the World and Propelled the Civil Rights Movement offers the first, and as of 2018, only comprehensive account of the 1955 murder, the trial, and the 2004-2007 FBI investigation into the case and Mississippi grand jury decision. By all accounts, it is the definitive account of the case. It tells the story of Emmett Till, the fourteen-year-old African American boy from Chicago brutally lynched for a harmless flirtation at a country store in the Mississippi Delta. Anderson utilizes documents that had never been available to previous researchers, such as the trial transcript, long-hidden depositions by key players in the case, and interviews given by Carolyn Bryant to the FBI in 2004 (her first in fifty years), as well as other recently revealed FBI documents. Anderson also interviewed family members of the accused killers, most of whom agreed to talk for the first time, as well as several journalists who covered the murder trial in 1955.

Till's murder and the acquittal of his killers by an all-white jury set off a firestorm of protests that reverberated all over the world and spurred on the civil rights movement. Like no other event in modern history, the death of Emmett Till provoked people all over the United States to seek social change. Anderson's exhaustively researched book is also the basis for a forthcoming ABC limited series entitled Women of the Movement, which is being written/executive-produced by Marissa Jo Cerar; directed by Gina Prince-Bythewood, Tina Mabry, Julie Dash, and Kasi Lemmons; and executive-produced by Jay-Z, Jay Brown, Tyran “Ty Ty” Smith, Will Smith, James Lassiter, Aaron Kaplan, Dana Honor, Michael Lohmann, Rosanna Grace, Alex Foster, John Powers Middleton, and David Clark.

For over six decades the Till story has continued to haunt the South as the lingering injustice of Till's murder and the aftermath altered many lives. Fifty years after the murder, renewed interest in the case led the Justice Department to open an investigation into identifying and possibly prosecuting accomplices of the two men originally tried. Between 2004 and 2005, the Federal Bureau of Investigation conducted the first real probe into the killing and turned up important information that had been lost for decades. Anderson covers the events that led up to this probe in great detail, as well as the investigation itself.

This book will stand as the definitive work on Emmett Till for years to come. Incorporating much new information, the book demonstrates how the Emmett Till murder exemplifies the Jim Crow South at its nadir. The author accessed a wealth of new evidence. Anderson made a dozen trips to Mississippi and Chicago over a ten-year period to conduct research and interview witnesses and reporters who covered the trial. In Emmett Till, Anderson corrects the historical record and presents this critical saga in its entirety.

"Devery S. Anderson's Emmett Till: The Murder That Shocked the World and Propelled the Civil Rights Movement provides a full and detailed picture of the murder of Emmett Till and its legacy. While there have been numerous books and several documentaries on Till's murder, trial, and its aftermath—including the posthumously published Death of Innocence: The Story of the Hate Crime That Changed America by Till's mother—Mr. Anderson's book takes readers deep inside the political psyche and cultural mindset of Mississippi at the time. Emmett Till is masterfully researched, drawing on public archives and public collections to present the most detailed account of this horrific story. "

"Drawing on new evidence and interviews with Till's family members, witnesses to the murder, and reporters who covered the trial that exonerated the accused killers, Anderson offers a very detailed examination of the murder and its significance in the long history of racial abuses in the South under Jim Crow. He details the lives of Emmett and Mamie Till, his mother, in Chicago; the fateful trip to Mississippi; and the aftermath. In a separate section, Anderson looks at how the story of Till's death reemerged after fifty years and sparked an intense investigation, including the exhumation of Till's body. He concludes with his own theory about the case and its legacy, a fund to investigate cold cases of civil rights murders prior to 1970. Photographs enhance this very thorough and compelling look at the murder that galvanized the civil rights movement and continues to act as a rallying call for racial justice. "

"Anderson's essential book—written as a compelling unfolding narrative—is clearly the product of exhaustive research. The book digs deep and offers a richness of information that is always meticulous and often new in its intricate specifics, background, and follow-up. Anderson combs historical documents, conducts major archival research, and interviews witnesses and others still living who knew Emmett Till, had some involvement, or covered the trial. As a result, this book is recommended for those coming to the topic for the first time, but also for those who have long studied the case. For those informed readers, Anderson treats the history with a detail that has not before been available. "

"You may think, as I did, that you know the totality of this tale, but you will learn much that is new, as I did. That is because Anderson has tracked down every source; read every testimony, description, and transcript; interviewed every living witness; and read the memories of the departed. He has searched every newspaper and magazine story, including the most obscure, and gathered every conflicting version. Where witnesses conflict, he offers the likeliest version and acknowledges the disagreement. He places this horrendous crime where it belongs: centrally in the civil rights movement. . . . This is a book that covers its subject magnificently. "

- from the foreword by Julian Bond, chairman emeritus, NAACP

"Devery S. Anderson has written the definitive account of the heinous lynching of Emmett Till in 1955, a crime that galvanized the American civil rights movement. Emmett Till explores the case inside and out, presenting information, evidence, and testimonies that have never been acknowledged publicly in sixty years. With over a decade of industrious research into the case, Anderson leaves no stone unturned. Thanks to him, this unforgettable book will allow readers of all generations to reflect on and learn of the true story of a fourteen-year-old youth from Chicago, murdered in Mississippi over a wolf whistle. Just when you thought you knew everything about the case, this book will unequivocally change your mind. "

"Anderson grapples with the Rashomon-like quality of Till's murder through consistently careful research and thoughtful analysis. This compelling narrative will hold the attention of readers who are otherwise unfamiliar with the case, and it is likely to be the definitive work on this subject for decades to come. "

"No one knows more about this brutal murder and its contested legacy than Devery Anderson. In his long-anticipated and meticulously researched study, he has delivered, as we all expected, the definitive account of this case. Anderson has read every source, tracked every lead, assessed every claim, and weighed every piece of evidence in his passionate quest to know the truth. This is the Emmett Till book that historians have been waiting for, and it is the book that Emmett Till's legacy deserves. "

- Christopher Metress, associate provost for academics, Samford University; editor of The Lynching of Emmett Till: A Documentary Narrative

Other Books By Devery S. Anderson or Julian Bond

We Shall Not Be Moved

This Light of Ours