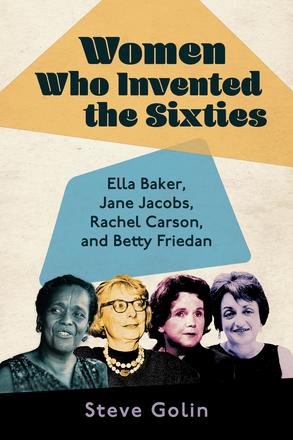 While there were many protests in the 1950s—against racial segregation, economic inequality, urban renewal, McCarthyism, and the nuclear buildup—the movements that took off in the early 1960s were qualitatively different. They were sustained, not momentary; they were national, not just local; they changed public opinion, rather than being ignored. Women Who Invented the Sixties tells the story of how four women helped define the 1960s and made a lasting impression for decades to follow.

In 1960, Ella Baker played the key role in the founding of the Student Nonviolent Coordinating Committee, which became an essential organization for students during the civil rights movement and the model for the antiwar and women’s movements. In 1961, Jane Jacobs published The Death and Life of Great American Cities, changing the shape of urban planning irrevocably. In 1962, Rachel Carson published Silent Spring, creating the modern environmental movement. And in 1963, Betty Friedan wrote The Feminine Mystique, which sparked second-wave feminism and created lasting changes for women. Their four separate interventions helped, together, to end the 1950s and invent the 1960s.

Women Who Invented the Sixties situates each of these four women in the 1950s—Baker’s early activism with the NAACP and the Southern Christian Leadership Conference, Jacobs’s work with Architectural Forum and her growing involvement in neighborhood protest, Carson’s conservation efforts and publications, and Friedan’s work as a labor journalist and the discrimination she faced—before exploring their contributions to the 1960s and the movements they each helped shape.

"Women Who Invented the Sixties highlights the seismic shifts women brokered during the midcentury, revealing the power of individual women pushing ahead in the areas of their own passion and interest, and the ways that bring them into larger movements and conversations for change."

- Ansley L. Quiros, author of God with Us: Lived Theology and the Freedom Struggle in Americus, Georgia, 1942–1976

"Steve Golin has written an engaging book on an important topic—how the 1950s became the 1960s. He has done so by focusing on four women—Ella Baker, Rachel Carson, Betty Friedan, and Jane Jacobs—in a collective biography in which he skillfully compares and contrasts their lives, ideologies, and careers."

- Daniel Horowitz, author of Betty Friedan and the Making of “The Feminine Mystique”: The American Left, the Cold War, and Modern Feminism

"Viewed from this perspective Baker, Jacobs, Carson and Friedan served as role models for those who continue to challenge the status quo in the quest for a better world. In his thoughtful study, Golin gives them the credit they earned."