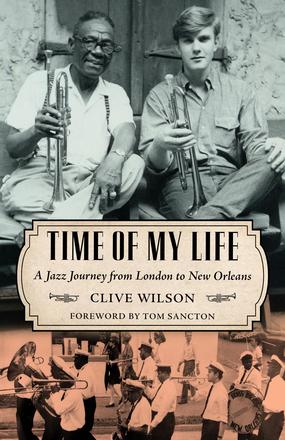 Time of My Life

A Jazz Journey from London to New Orleans

By Clive Wilson
Foreword by Thomas A. Sancton
Series: American Made Music Series

New Orleans is a kind of Mecca for jazz pilgrims, as Whitney Balliett once wrote. This memoir tells the story of one aspiring pilgrim, Clive Wilson, who fell in love with New Orleans jazz in his early teens while in boarding school in his native England. It is also his story of gradually becoming disenchanted with his family and English environment and, ultimately, finding acceptance and a new home in New Orleans.

The timing of his arrival, at age twenty-two, just a few weeks after the signing of the 1964 Civil Rights Act and the end of legal segregation, placed him in a unique position with the mostly African American musicians in New Orleans. They showed him around, brought him into their lives, gave him music lessons, and even hired him to play trumpet in brass bands. In short, Wilson became more than a pilgrim; he became an apprentice, and for the first time, legally, in New Orleans, he could make that leap.

Time of My Life: A Jazz Journey from London to New Orleans tells the story of Wilson’s journey as he discovers the contrast between his imagined New Orleans and its reality. Throughout, he delivers his impressions and interactions with such local musicians as “Fat Man” Williams, Manuel Manetta, Punch Miller, and Billie and DeDe Pierce. As his playing improves, invitations to play in local bands increase. Eventually, he joins in the jam and, by doing so, integrates the Original Tuxedo Jazz Band, which had been in continuous existence since 1911. Except for a brief epilogue, this memoir ends in 1979, when Wilson assembles his own band for the first time, the Original Camellia Jazz Band, with musicians who had been among his heroes when he first arrived in New Orleans.

"Love for the city of New Orleans and its music flows through this book like a beautiful melody. Those who share these passions will want to have this memoir from legendary trumpeter Clive Wilson on their bookshelf. "

- Thomas Brothers, author of Louis Armstrong’s New Orleans and Help! The Beatles, Duke Ellington, and the Magic of Collaboration

"Clive Wilson’s Time of My Life tells the seemingly unlikely tale of an Englishman who crosses the color line and becomes accepted as a first-call traditional jazz trumpeter in New Orleans. It’s an informative and entertaining memoir, full of new insight into the city’s jazz scene from the mid-1960s on. "

"Time of My Life: A Jazz Journey from London to New Orleans by Clive Wilson is a conscientious and enjoyable story of an Englishman’s half-century of immersion in the music and culture of New Orleans. As such, it is a fine tribute to that music and culture. Wilson’s memoir of a career as a trumpeter and bandleader (which includes opening for Louis Armstrong in 1970) offers valuable perspectives on the preservation of early jazz. "

- Paul Devlin, editor of Rifftide: The Life and Opinions of Papa Jo Jones and Murray Talks Music: Albert Murray on Jazz and Blues