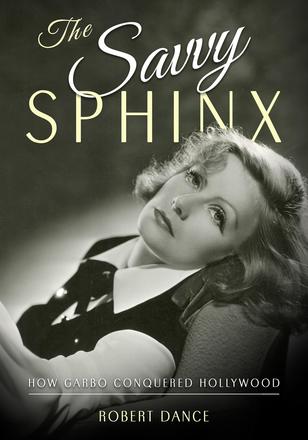 From the late 1920s through the thirties, Greta Garbo (1905–1990) was the biggest star in Hollywood. She stopped making films in 1941, at only thirty-six, and thereafter sought a discreet private life. Still, her fame only increased as the public and press clamored for news of the former actress. At the time of her death, forty-nine years later, photographers continued to stalk her, and her death was reported on the front pages of newspapers worldwide.

In The Savvy Sphinx: How Garbo Conquered Hollywood, Robert Dance traces the strategy a working-class Swedish teenager employed to enter motion pictures, find her way to America, and ultimately become Hollywood’s most glorious product. Brilliant tactics allowed her to reach Hollywood’s upper-most echelon and made her one of the last century’s most famous people. Garbo was discovered by director Mauritz Stiller, who saw promise in her nascent talent and insisted that she accompany him when he was lured to America by an MGM contract. By twenty she was a movie star and the epitome of glamour. Soon Garbo was among the highest-paid performers, and in many years she occupied the number one position. Unique among studio players, she quickly insisted on and was granted final authority over her scripts, costars, and directors. But Garbo never played the Hollywood game, and by the late twenties her unwillingness to grant interviews, attend premieres, or meet visiting dignitaries won her the sobriquet the Swedish Sphinx.

The Savvy Sphinx, which includes over a hundred beautiful images, charts her rise and her long self-imposed exile as the queen who abdicated her Hollywood throne. Garbo was the paramount star produced by the Hollywood studio system, and by the time of her death her legendary status was assured.

"Film historian [Robert] Dance (The Lost World of DeMille) brings the glamour of old Hollywood to the page in this extensive look at the life and career of Greta Garbo. . . . This entertaining behind-the-scenes look at the making of an icon makes for a fascinating snapshot of the era. "

"The Savvy Sphinx: How Garbo Conquered Hollywood is an impressive offering that brings together the various aspects of the Garbo legend. Not only does Robert Dance have a sure command of Garbo’s films, but he also writes knowledgeably about Hollywood’s rich history. This comprehensive book will be welcomed by movie lovers as well as libraries and major film collections. Mr. Dance’s stated mission is to ‘chart the rise of Greta Garbo. ’ He delivers. "

"The Savvy Sphinx: How Garbo Conquered Hollywood is a fascinating and revealing look at the mystique that is Greta Garbo. Who was Garbo, and why does she remain important in our culture today? The author takes us on a journey of discovery through the mire of Hollywood fact and fiction and the intrinsic mechanisms of the film industry, and explains to us the conundrum that was Greta Garbo, who placed herself in an era ripe for her unique beauty and talent. An intriguingly rich look into the lore and legend of the actress, The Savvy Sphinx is touched with sound realism and impact, justifying the importance she brought to our cinematic and cultural history. Thanks to Garbo’s living presence on celluloid today, her beauty and her art on film remain for future generations to swoon over and quiver, to study, and to relish. And perchance to dream. "

- Stephen Michael Shearer, author of Patricia Neal: An Unquiet Life, Beautiful: The Life of Hedy Lamarr, Gloria Swanson: The Ultimate Star, and Glamour and Style: The Beauty of Hedy Lamarr

"Mr. Dance’s book places a special emphasis on the marketing of Garbo’s image. . . . His details about Garbo’s publicity stills and photographic portraits are valuable contributions to the story of the actress as a corporate brand."

"Dance undoubtedly adds to the wealth of material existing on Greta Garbo, contributing his inimitable critical perceptions and historical observations. . . . [A] quite excellent exploration of the Greta Garbo legend."

"The Savvy Sphinx is richly rewarding. I highly recommend The Savvy Sphinx to anyone who already loves Greta Garbo or anyone wanting more insights on her special brand of celebrity and fame."

- Raquel Stetcher, Out of the Past: A Classic Film Blog

Other Books By Robert Dance