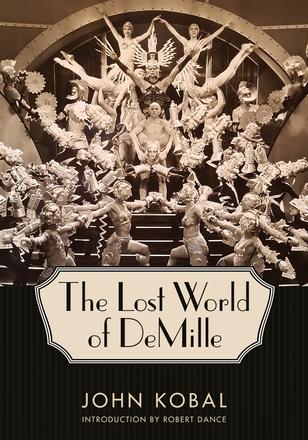 Published at long last, a great film historian's biography of the director who invented Hollywood

As only an accomplished author, consummate collector, and savvy insider can, John Kobal tells the story of the man who invented Hollywood, Cecil Blount DeMille (1881–1959). Kobal narrates the story of DeMille’s life and follows the director’s career from his first film, The Squaw Man, in 1914, through the seventy films he directed culminating with The Ten Commandments in 1956 before his death in 1959. Even that first film received an enthusiastic response from the public, and that popular enthusiasm would follow DeMille throughout his career.

DeMille got his start by observing a film being shot—once standing for hours on a box looking through a window, watching every move made by the director, players, and cameraman. From that humble beginning, he soon mastered the craft of directing and created one of show business’s greatest careers. Autocrat and artist, DeMille immersed himself totally in each picture he directed and demanded complete fealty from his casts and crews. DeMille was said to know more about what the American public wanted than anyone else in Hollywood. He pushed the boundaries of censorship, and audiences responded by forming long lines at the box office. From the American West to ancient Egypt, he created such magical films as The Crusades and The Greatest Show on Earth that brought vividly to life fantasies perfectly suited to post–World War I and mid-century America.

Kobal describes DeMille’s impact on Hollywood as a director and showman. He argues that this master filmmaker stands for something largely lost in American filmmaking, a sort of naïve, generous, big-thinking self-confidence—a belief that all things are possible.

John Kobal wrote over thirty books on film and photography. His final manuscript, The Lost World of DeMille, was completed shortly before his death in 1991. It is published at last by University Press of Mississippi.

"The history of The Lost World of DeMille is itself something of an epic. . . . There have been other DeMille books published in the time since Kobal’s death, but this one has a personal touch, not least because of its characterful prose. "

"[An] incredible, truly impressive look at filmmaker Cecil B. DeMille. . . . No stone is left unturned here, making this an absolute must-own for that cinephile in your life who just can’t turn off TCM. "

- Joshua Brunsting, 2019 Criterioncast Gift Guide: The 20 Best Film Books To Give This Year

"A notable addition to the commentary of an important and still overlooked film director. "

"I'd like to regard it as a valuable resource and a temporary way station before a truly critical biography in English comes along—assuming, that is, that one ever does. "

"The late John Kobal—who left us the world’s largest and richest collection of film stills—was also a passionate cinema historian and biographer. His life of Cecil B. DeMille has at last been published, and it is as colorful, dramatic, and detailed as one of the director’s great epics. I learned a great deal from this book, a lush and loving tribute to one of the founders of the old Hollywood. It will certainly delight those who love the movies. "

"John Kobal was a notable figure in motion picture history and a true Hollywood insider, so it makes sense that his final book is an account of one of the ultimate Hollywood insiders, film pioneer Cecil B. DeMille and his kingdom. The Lost World of DeMille is written in a fluent and persuasive style, as one would expect of an experienced author as knowledgeable about the subject as Kobal. With compelling personal interviews from stars and numerous behind-the-camera craftspeople, Kobal does an excellent job of presenting DeMille’s epic films, along with his role in the advancement of the craft. This book is a cause for celebration. "

Other Books By John Kobal or Robert Dance