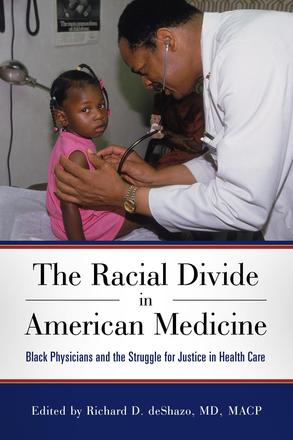 The Racial Divide in American Medicine

Black Physicians and the Struggle for Justice in Health Care

A revealing account of the long history of separation, isolation, disparities, and hope for eventual healing in American health care

The Racial Divide in American Medicine documents the struggle for equity in health and health care by African Americans in Mississippi and the United States and the connections between what happened there and the national search for social justice in health care. Dr. Richard D. deShazo and the contributors to the volume trace the dark journey from a system of slave hospitals in the state, through Reconstruction, Jim Crow, and the civil rights era, to the present day. They substantiate that current health disparities are directly linked to America’s history of separation, neglect, struggle, and disparities.

Contributors reveal details of individual physicians’ journeys for recognition both as African Americans and as professionals in Mississippi. Despite discrimination by their white colleagues and threats of violence, a small but fearless group of African American physicians fought for desegregation of American medicine and society. For example, T. R. M. Howard, MD, in the all-black city of Mound Bayou led a private investigation of the Emmett Till murder that helped trigger the civil rights movement. Later, other black physicians risked their lives and practices to provide care for white civil rights workers during the civil rights movement.

Dr. deShazo has assembled an accurate account of the lives and experiences of black physicians in Mississippi, one that gives full credit to the actions of these pioneers. Dr. deShazo’s introduction and the essays address ongoing isolation and distrust among black and white colleagues. This book will stimulate dialogue, apology, and reconciliation, with the ultimate goal of improving disparities in health and health care and addressing long-standing injustices in our country.

"The Civil Rights Act legally eliminated discrimination through Title VI, which required that any individual or institution receiving federal funding must practice racial integration. However, a racial divide and remnants of social injustices in the American healthcare system remain with us today. The Racial Divide in American Medicine, incorporating writings from an interdisciplinary group of experts, does an excellent job in chronicling the history of healthcare for American blacks, beginning with slave healthcare. The focus, however, is on the civil rights era and its link to past and present struggles and disparities. The book provides a historical and social context to the civil rights movement by describing how black physicians in the state of Mississippi contributed to the movement and by considering the progress that has been made since passage of the landmark legislation. The book is both interesting and easy to read; it will add to a library’s collection in the areas of civil rights, medicine, public health, and American history. It is an important contribution to understanding the nation’s progress and what can still be done to repair the racial divide. Extensive chapter notes facilitate the ability to locate additional sources. "

"In my opinion, every physician on the planet should take pride in the work of these amazing physicians. They lived up to the principles of the Hippocratic Oath that they took upon completion of their medical education. Reading about them made me feel proud to be a physician working in the company of so many courageous, dedicated, and selfless individuals. . . . I hope that the publication of The Racial Divide in American Medicine will increase awareness and empathy concerning one of the greatest problems we have here at home. And, perhaps, it will help to bring about changes in our society that will benefit us all. "

"The Racial Divide in American Medicine: Black Physicians and the Struggle for Justice in Health Care shines a bright light on precisely this civil rights history of longstanding inequities. The collection of chapters, beautifully developed by Richard deShazo, MD, is written by individuals often with first-hand experience of the painful legacy of racism in medicine throughout the United States, with a focus on the American South and Mississippi in particular. These are stories that must be told. "

"This book offers a vista into a heretofore hidden dimension of the most dramatic period in the nation’s modern history of civil rights. It will dazzle medical historians and general readers regardless of their political or academic vantage point. It is a major contribution to the honest remembering of America’s medical and civil rights past—a record that must include the efforts by Mississippians themselves. "

"We don’t often equate physicians and health care with civil rights, but throughout the twentieth century a number of physicians—both black and white—fought tirelessly and heroically for both accessibility and improvement to health care for African Americans in the South. In this impressive collection of essays, their overlooked contributions are told, often by those who were directly at the center of change, such as Mississippi’s Dr. Robert Smith. An important read for those who want to understand both the accomplishments of the past and continuing struggles that persist in equal access to health care. "

- Thomas J. Ward Jr., author of Black Physicians in the Jim Crow South and Out in the Rural: A Mississippi Health Center and Its War on Poverty