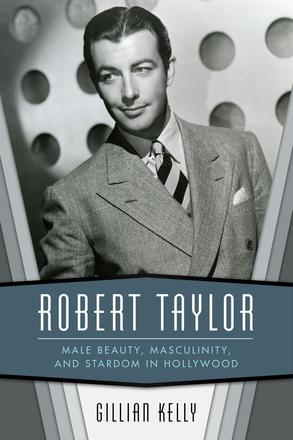 Because of his lengthy screen resume that includes almost eighty appearances in such movies as Camille and Waterloo Bridge, as well as a marriage and divorce to actress Barbara Stanwyck, Robert Taylor was a central figure of Hollywood’s classical era. Despite this, he can be regarded as a “lost” star, an interesting contradiction given the continued success he enjoyed during his lifetime.

In Robert Taylor: Male Beauty, Masculinity, and Stardom in Hollywood, author Gillian Kelly investigates the initial construction and subsequent developments of Taylor's star persona across his thirty-five-year career. By examining concepts of male beauty, men as object of the erotic gaze, white American masculinity, and the unusual longevity of a career initially based on looks, Kelly highlights how gender, masculinity, and male stars and the ageing process affected Taylor's career. Placing Taylor within the histories of both Hollywood’s classical era and mid-twentieth-century America, this study positions him firmly within the wider industrial, cultural, and socioeconomic contexts in which he worked.

Kelly examines Taylor’s film and television work as well as ephemeral material, such as fan magazines, to assess how his on- and off-screen personas were created and developed over time. Taking a mostly chronological approach, Kelly places Taylor’s persona within specific historical moments in order to show the complex paradox of his image remaining consistently recognizable while also shifting seamlessly within the Hollywood industry. Furthermore, she explores Taylor’s importance to Hollywood cinema by demonstrating how a star persona like his can “fit” so well, and for so long, that it almost becomes invisible and, eventually, almost forgotten.

"The book offers an extensive analysis of Robert Taylor as a constructed persona. . . . The book is of interest to film historians, gender scholars and film fans. "

"Gillian Kelly’s groundbreaking book sheds light not only on the complex and unique image of Robert Taylor as ‘the perfect star,’ but also on the creation of stars under the studio system, what their lives were like, and how they had to adapt when that system declined. Clearly contextualized within star studies, this detailed and nuanced work is meticulously researched and written with charm and candor. This handsome, frequently forgotten star merits this close attention, which reveals so much about how types of masculinity, male beauty, press coverage, and private life affected the creation and endurance of Taylor’s star persona. "