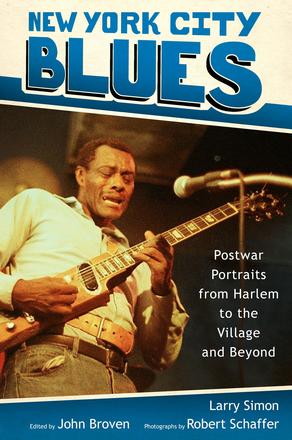 Postwar Portraits from Harlem to the Village and Beyond

A first-ever book on the subject, New York City Blues: Postwar Portraits from Harlem to the Village and Beyond offers a deep dive into the blues venues and performers in the city from the 1940s through the 1990s. Interviews in this volume bring the reader behind the scenes of the daily and performing lives of working musicians, songwriters, and producers. The interviewers capture their voices — many sadly deceased — and reveal the changes in styles, the connections between performers, and the evolution of New York blues.

New York City Blues is an oral history conveyed through the words of the performers themselves and through the photographs of Robert Schaffer, supplemented by the input of Val Wilmer, Paul Harris, and Richard Tapp. The book also features the work of award-winning author and blues scholar John Broven. Along with writing a history of New York blues for the introduction, Broven contributes interviews with Rose Marie McCoy, “Doc” Pomus, Billy Butler, and Billy Bland. Some of the artists interviewed by Larry Simon include Paul Oscher, John Hammond Jr. , Rosco Gordon, Larry Dale, Bob Gaddy, “Wild” Jimmy Spruill, and Bobby Robinson. Also featured are over 160 photographs, including those by respected photographers Anton Mikofsky, Wilmer, and Harris, that provide a vivid visual history of the music and the times from Harlem to Greenwich Village and neighboring areas.

New York City Blues delivers a strong sense of the major personalities and places such as Harlem’s Apollo Theatre, the history, and an in-depth introduction to the rich variety, sounds, and styles that made up the often-overlooked New York City blues scene.

"New York has been a magnet for so many styles of music that its impressive range of blues artists has tended to be overlooked. Larry Simon and John Broven display the rich tapestry of New York blues, with threads from Georgia, Florida, and Texas twining with Harlem, Brooklyn, and Greenwich Village. The voices are notably varied, from little-known neighborhood favorites to million-selling songwriters, and range across the jazz, rock, soul, and folk scenes. The result is half history, half family reunion; a warm and vibrant survey that reminds me of old favorites and inspires me to check out some artists I should know better. "

- Elijah Wald, musician and author of Escaping the Delta, How the Beatles Destroyed Rock 'n' Roll, and Dylan Goes Electric!

"In New York City Blues, Larry Simon makes an essential contribution to our collective understanding of how American culture actually became American culture: through the volatile (but tasty) commingling of Blacks, Beats, folkies, jazzers, hippies, and punks in a stewpot of clubs, bars, lofts, and concert halls between Harlem and East Houston Street. Their penchant for flatted thirds elevated our world, and their first-hand recollections—pardon the expression, but they rock. "

- Randall Rothenberg, executive chair at Interactive Advertising Bureau and author of Where the Suckers Moon: The Life and Death of an Advertising Campaign and The Neoliberals: Creating the New American Politics

- Meg Rosoff, author of How I Live Now and The Great Godden

"A really important book! Larry Simon, John Broven, and others have done a fine job with this first book ever on the history of New York City blues. Not just an excellent historical survey, but it is also filled with great stories told directly by important artists and record men, with many rare photos. "

"The book intimately and richly documents the blues in New York City in the post-war decades but does so through the stories and reflections of the men and women who performed the music. Any blues fan, or indeed, anyone interested in the history of music in America will find this a fascinating and rewarding read."

- Gary Burnett, Down At The Crossroads blog

"Guitarist and writer Larry Simon rectifies the void with his authoritative book on the history of the city’s blues music contributions, New York City Blues: Postwar Portraits From Harlem to the Village and Beyond, published by University of Mississippi Press. He reveals the untold story of the historical blues scene with illuminating tales, delving into the lives of long-forgotten personalities and the clubs of the times. But most importantly, Simon allows the musicians he’s come to know relate their stories."

- Dan Ouellette, Jazz and Beyond Intel

"New York City Blues: Postwar Portraits from Harlem to the Village and Beyond by Larry Simon is a well-conceived and executed book that interviews working musicians who formed the city’s blues culture…[a] carefully and entertainingly crafted book."

"…[T]his is a delightful and thought-provoking book, full of the artists’ own take on their lives and their music."