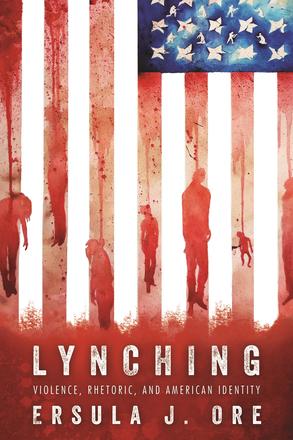 Winner of the 2020 Rhetoric Society of America Book Award

While victims of antebellum lynchings were typically white men, postbellum lynchings became more frequent and more intense, with the victims more often black. After Reconstruction, lynchings exhibited and embodied links between violent collective action, American civic identity, and the making of the nation.

Ersula J. Ore investigates lynching as a racialized practice of civic engagement, in effect an argument against black inclusion within the changing nation. Ore scrutinizes the civic roots of lynching, the relationship between lynching and white constitutionalism, and contemporary manifestations of lynching discourse and logic today. From the 1880s onward, lynchings, she finds, manifested a violent form of symbolic action that called a national public into existence, denoted citizenship, and upheld political community.

Grounded in Ida B. Wells’s summation of lynching as a social contract among whites to maintain a racial order, at its core, Ore’s book speaks to racialized violence as a mode of civic engagement. Since violence enacts an argument about citizenship, Ore construes lynching and its expressions as part and parcel of America’s rhetorical tradition and political legacy.

Drawing upon newspapers, official records, and memoirs, as well as critical race theory, Ore outlines the connections between what was said and written, the material practices of lynching in the past, and the forms these rhetorics and practices assume now. In doing so, she demonstrates how lynching functioned as a strategy interwoven with the formation of America’s national identity and with the nation’s need to continually restrict and redefine that identity. In addition, Ore ties black resistance to lynching, the acclaimed exhibit Without Sanctuary, recent police brutality, effigies of Barack Obama, and the killing of Trayvon Martin.

"Ultimately, Lynching: Violence, Rhetoric, and American Identity makes undeniable the life-and-death stakes of this work and the proximity of trauma for Black scholars, a reminder to the field that’s both painful and affirming. "

"In addition to being profoundly instructive regarding the ways U. S. national identity forms around lynched Black bodies, which Ore argues function as “a powerfully persuasive symbol of antiblack citizenship,” Lynching helps us understand that the lynch mob does its work, often quietly, in the hallways of our predominantly white institutions, on the pages of our books and journals, and in various other spaces where academic labor takes place. "

"Ore’s focus is rhetoric and the power of the lynching trope in American culture past and present. She is highly persuasive in her analysis of the functions and tragic persistence of this trope in American identity. The book is also well written and accessible for an academic monograph. A preface and postscript narrating her own experience with racialized police brutality add particular poignancy. This book will reward reading by all interested in the rhetoric of American lynching. "

"To date, scholars of lynching studies have not examined the rhetorics through which lynching asserted citizenship identity and civic belonging. Understanding this aspect of lynching provides new insight both into lynching’s (rhetorical) functions and into the ways lynching reverberates in the present as a constitutive feature of white civic belonging. This aspect also underscores lynching’s performance as a form of state-sanctioned racial violence. I’ve not yet read a work that so carefully outlines the ways lynching and its rhetorics were/are interwoven both with the formation of America’s national identity and with the nation’s need to continually renew that identity. "

"Fecund, provocative, and contemporarily resonant, Lynching makes at least three significant contributions: One, in addition to its cultural studies, political science, black studies, and historical lens, it reads lynching through a rhetorical method/analysis. Two, this approach allows the author to revitalize and repurpose heretofore both well-known, previously quoted material as well as less cited archival material/content to different effect and affect. As a result, tethering the primal terrain of literal lynching to Emmett Till, Trayvon Martin, and former President Barack Obama makes the lynching trope contemporarily relevant. Three, and maybe most significantly, Ore makes clear that lynching was not excessive or incidental to state power, but rather that lynching was/is ‘organic to civil society’ reflecting the racial order of things. Lynching is a provocative, trenchant, very relevant rhetorical analysis of the ongoing force of the lynching trope. Because it is both historically anchored and currently relevant, Lynching may evoke a sense of significance for an extended period of time. "