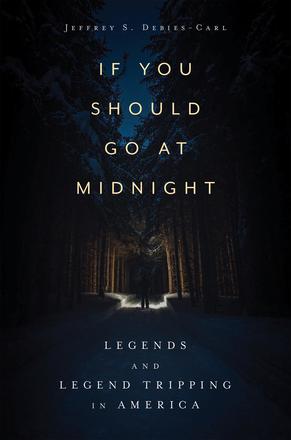 Legends and Legend Tripping in America

Tonight, across America, countless people will embark on an adventure. They will prowl among overgrown headstones in forgotten graveyards, stalk through darkened woods and wildlands, and creep down the crumbling corridors of abandoned buildings. They have set forth in search of a profound paranormal experience and may seem to achieve just that. They are part of the growing cultural phenomenon called legend tripping.

In If You Should Go at Midnight: Legends and Legend Tripping in America, author Jeffrey S. Debies-Carl guides readers through an exploration of legend tripping, drawing on years of scholarship, documentary accounts, and his own extensive fieldwork. Poring over old reports and legends, sleeping in haunted inns, and trekking through wilderness full of cannibal mutants and strange beasts, Debies-Carl provides an in-depth analysis of this practice that has long fascinated scholars yet remains a mystery to many observers.

Debies-Carl argues that legend trips are important social practices. Unlike traditional rites of passage, they reflect the modern world, revealing both its problems and its virtues. In society as well as in legend tripping, there is ambiguity, conflict, crisis of meaning, and the substitution of debate for social consensus. Conversely, both emphasize individual agency and values, even in spiritual matters. While people still need meaningful and transformative experiences, authoritative, traditional institutions are less capable of providing them. Instead, legend trippers voluntarily search for individually meaningful experiences and actively participate in shaping and interpreting those experiences for themselves.

"If You Should Go at Midnight is an insightful, thorough, and innovative study of legend tripping, which will make an excellent contribution to the available literature on the subject."