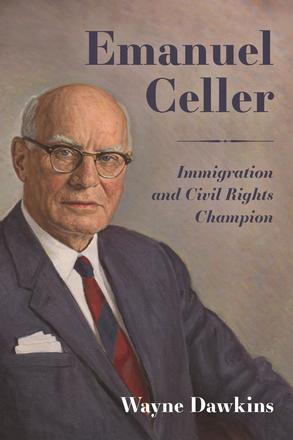 Congressman Emanuel Celler (1888–1981) was a New York City congressman who served in the United States House of Representatives from 1923 to 1973. Celler’s almost fifty-year career was highlighted by his long fight to eliminate national origin quotas as a basis for immigration restrictions and his battles for civil rights legislation. In Emanuel Celler: Immigration and Civil Rights Champion, author Wayne Dawkins introduces new readers to a figure integral to our contemporary political system.

Celler’s own immigrant background framed his lifelong opposition to immigration restrictions and his corresponding support for reducing barriers for immigrant entry into the United States. After decades of struggle, he proposed and steered through the House the Hart-Celler Act of 1965, which eliminated national origins as a consideration for immigration, profoundly shaping modern America.

Celler was also a consistent advocate for civil rights. As chairman of the House Judiciary Committee from 1949 to 1973 (except for a break from 1953 to 1955), Celler was involved in drafting and passing the Civil Rights Act of 1964, the Voting Rights Act of 1965, and the Civil Rights Act of 1968. During his career he was also deeply involved in landmark antitrust legislation, the establishment of US ties with the state of Israel, and the Gun Control Act of 1968, and was the author of three constitutional amendments, including the 25th that established presidential succession.

Dawkins profiles a complex politician who shaped the central tenets of Democratic Party liberalism for much of the twentieth century and whose work remains central to the nation, and our political debates, today.

Emanuel Celler (1888–1981) could be the most significant US legislator of the twentieth century. He cosponsored three Constitutional amendments—the twenty-third (voting rights for District of Columbia residents), the twenty-fourth (poll taxes banned), and the twenty-fifth (clear succession established if the president is removed from office). And, as a longtime chairman of the House Judiciary Committee, he reluctantly cosponsored a fourth—the twenty-sixth amendment (18-year-old voting rights).

Over the past decade, Celler, who served fifty years in Congress, has been a supporting cast member in at least a dozen books about immigration or civil rights. He was frequently cited in One Mighty and Irresistible Tide (2020) and noted in two key moments of The Guarded Gate (2019). And he was cited generously in Goliath (2019), a book about Celler’s other passion—antitrust and monopoly busting.

But this fall, he will at last be the focus of a full-length biography, Emanuel Celler: Immigration and Civil Rights Champion. And I believe it will become the go-to book for anyone wanting to know more about this history-making legislator.

"Praise for Wayne Dawkins:
Wayne Dawkins keeps building an impressive résumé for using his talent for digging and research to shed light on what might be characterized as ‘hidden history. ’"

Other Books By Wayne Dawkins