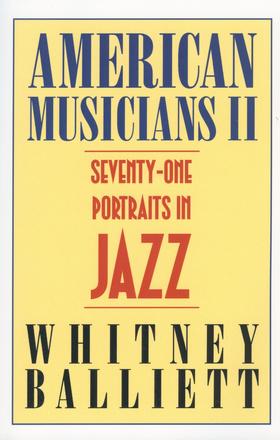 This is Whitney Balliett's long-awaited "big book. " In it are all the jazz profiles he has written for The New Yorker during the past 24 years. These include his famous early portraits of Pee Wee Russell, Red Allen, Earl Hines, and Mary Lou Williams, done when these giants were in full flower; his recent reconstructions of the lives of such legends as Art Tatum, Coleman Hawkins, Jack Teagarden, Zoot Sims, and Dave Tough; His quick but indelible glimpses into the daily (or nocturnal) lives of Duke Ellington and Charles Mingus; and his vivid pictures of such on-the-scene masters as Red Norvo, Ornette Coleman, Buddy Rich, Elvin Jones, Art Farmer, Michael Moore, and Tommy Flanagan. Also included are such lesser known but invaluable players as Art Hodes, Jabbo Smith, Joe Wilder, Warne Marsh, Gene Bertoncini, Joe Bushkin, and Marie Marcus.

All these profiles make the reader feel, as one observer has pointed out, that he is "sitting with Balliett and his subject and listening in. " The book can be taken as a kind of history of jazz, as well as a biographical encylopedia of many of its most important performers. It can also be regarded as a model of American prose. Robert Dawidoff said of Whitney Balliett"s most recent book, Jelly Roll, Jabbo and Fats, that "few people write as well about anything as Balliett writes about jazz. " And the late Philip Larkin wrote in 1982 of the "transcendence of Balliett's prose. "

He brings a poet's burning glass to his reflections on the art of music-making.

Other Books By Whitney Balliett 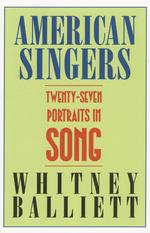 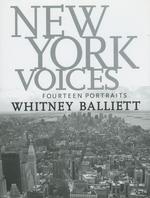