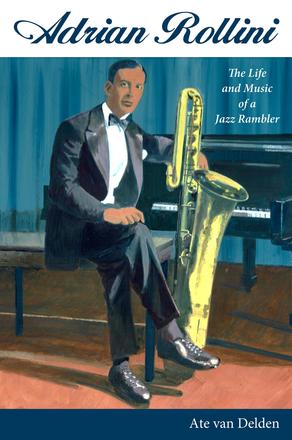 The Life and Music of a Jazz Rambler

Adrian Rollini (1903–1956), an American jazz multi-instrumentalist, played the bass saxophone, piano, vibraphone, and an array of other instruments. He even introduced some, such as the harmonica-like cuesnophone, called Goofus, never before wielded in jazz. Adrian Rollini: The Life and Music of a Jazz Rambler draws on oral history, countless vintage articles, and family archives to trace Rollini’s life, from his family’s arrival in the US to his development and career as a musician and to his retirement and death.

A child prodigy, Rollini was playing the piano in public at the age of five. At sixteen in New York he was recording pianola rolls when his peers recognized his talent and asked him to play xylophone and piano in a new band, the California Ramblers. When he decided to play a relatively new instrument, the bass saxophone, the Ramblers made their mark on jazz forever. Rollini became the man who gave this instrument its place. Yet he did not limit himself to playing bass parts—he became the California Ramblers’ major soloist and created the studio and public sound of the band.

In 1927 Rollini led a new band that included such jazz greats as Bix Beiderbecke and Frank Trumbauer. During the Depression years, he was back in New York playing with several bands including his own New California Ramblers. In the 1940s, Rollini purchased a property on Key Largo. He rarely performed again for the public but hosted rollicking jam sessions at his fishing lodge with some of the best nationally known and local players. After a car wreck and an unfortunate hospitalization, Rollini passed away at age fifty-three.

"It is hard to believe that in 2020 it is still possible to write a biography in great detail about a Jazz Age icon. But that is what this book is. With a treasury of information from interviews and periodicals, Ate van Delden, succeeded in creating a fascinating image of the work of a successful jazz icon. The book has Adrian Rollini's full life story and details his recordings, including those with major jazz musicians such as Bix Beiderbecke, Joe Venuti, Eddie Lang, Red Nichols and Frank Trumbauer. The book is a must-have for anyone with an interest in classic jazz and the Jazz Age. "

"Ate van Delden’s Adrian Rollini biography is quite detailed and tells about his personal relationships, musical development, many gigs, and his rarely-discussed later years. . . . This definitive and very well researched book tells the full story and should be of great interest to fans of 1920s jazz. "

"The long-awaited biography of multi-instrumentalist (bass saxophone, vibraphone, piano, goofus, hot fountain pen) jazz musician Adrian Rollini (1903–1956) is a rigorously documented, scholarly account of his life and music. Primary sources, interviews of Rollini's relatives and musicians who knew him, and over one thousand bibliographic citations bring an authoritative and detailed insight into Rollini’s personal life and musical career. The text is illustrated with numerous photographs and images. An indispensable addition to the book collections of early jazz and swing aficionados. "

"This book promises to be the definitive biography of multi-instrumentalist, band leader, and composer Adrian Rollini, a largely overlooked (in the literature) but nevertheless important jazz musician who rose to prominence in the mid-1920s and remained there for nearly two decades. "