The recent death of friend, colleague, and fellow novelist Mark Saunders has knocked me flat.

We are about the same age—I will turn 51 next week; Mark was 52 when he died suddenly at home. We were both sales managers, marketing directors, and then assistant directors, and we struggled with those demands at about the same time. In addition to all that, we were both MFA graduates trying to write fiction. In April 2013, I won the Juniper Prize and published a collection of short stories with University of Massachusetts Press. And in April 2012, Ohio University’s Swallow Press published Mark’s Ministers of Fire. For so many trials in writing and in publishing, I know I can say “Hey, Mark Saunders said the wisest thing in the world to me about that.” 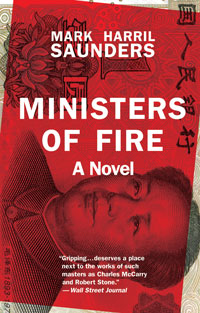 About being published, about how strange and disassociating the experience of being published can feel, he said this: “It’s as if you are in a dangerous, remote country. Someone hands you a satellite phone. On the phone, a voice tells you your wife has gone into labor and has been rushed to the hospital. Then the phone crackles, and the voice is gone.”

Being published, especially for the first time, is profoundly weird. A manuscript that you have crafted and revised mostly alone, dreamed about mostly if not entirely alone, that you have loved and honed absolutely alone, is now in the hands of strangers. And, as in Mark’s analogy, it can be quite hard to know just what those strangers are doing.

When serving authors, I frequently remind our staff to step back from the publishing world we believe we know and try to understand this predicament and help our authors. How could the author not have questions? How could the author, who has dreamed so long alone, not have misconceptions? There’s so much now about that analogy that seems the essence of Mark Saunders to me. Robin, his wife, and his children were the governing metaphors of his life—they figured in almost every private conversation at some key moment.

And what he wrote about in Ministers of Fire, danger and American espionage and black operations in China, that is there, too, in his wisdom.

Publishers Weekly gave Ministers of Fire a starred review. The Wall Street Journal named it one of the top 10 mystery novels of 2012, and the Washington Post listed it as one of the 50 notable works of fiction of the year. In the Washington Post, Rodney Welch called Ministers of Fire “a brilliant, exciting and profound spy tale about, among other things, what it means to have faith” and “[the novel] asks what it means to believe—in Mao, in Jesus Christ, in good intentions—as well as what it means to live in a fallen world.”

To serve our authors takes patience and generosity. And it takes a strong desire to make sure the spotlight is always on someone else. Mark contacted me in 2013 to introduce someone, Kevin Haworth. Mark said that Haworth was writing an article about creative writers from MFA programs working for university presses. Mark was director at Virginia by then, and, sure, he may have been deflecting the long work of an interview. He knew I was in the middle of promoting Some Kinds of Love: Stories and that Lauren Groff had just chosen my novella Sandy and Wayne for the Knickerbocker Prize from Big Fiction. And yet Haworth’s article appeared in the Writer’s Chronicle in April 2014, the pub month for the paperback of Ministers of Fire. What better moment for Mark to crow a little about himself? Mark knew (better than I ever will) how to shine the spotlight on whole communities of writers.

Mark understood that we serve that community of authors and its conversation and its creative discoveries first and foremost. When we were both sales managers who also still made New York publicity calls, we compared a lot of notes. I can’t recall what disappointment I was revealing when he compared the relationship between the publicist and the reporter to the relationship between the editor and the author. You want to become a trusted source, he said. “It’s all about relationships,” he advised. “Yes,” I argued with him, “but relationships are always about response.”

We must never forget our effect on the author’s life and aspirations. The second Mississippi Book Festival, held in August in one of the hottest and most humid states in our union, was already a euphoric success by 2 p.m. that Saturday. Fancy marketing consultants had warned us to expect no more than 1,000 attendees if that. Just tallying the seats occupied in the Capitol complex alone we were at almost 6,000 attendees. That did not count the hallways crammed with patrons we had to turn away from panels on poetry, comics, African American life, Civil Rights, southern history, historical fiction, and more. Inside the University Press of Mississippi’s tent, we were celebrating with a constant flow of authors and customers. We were dehydrated, exhausted, exultant. Something had to go wrong.

In one of the few ebbs that day, with customers still shopping and all of us dripping and delighted in the heat, our author Jason A. Peterson stopped outside the UPM tent and held his wife close to him in the booming sun. He had just been on a panel, and UPM had heralded his first book, Full Court Press: Mississippi State University, the Press, and the Battle to Integrate College Basketball and shouted about it in our book festival social media. In the hubbub of the festival, we were learning it was very rare to see any author in the tent twice—too much was going on all around the Capitol and grounds. Mr. Peterson looked so serious, standing there a second time.

“If I could have everyone’s attention,” he said with the volume of an author who regularly addresses large classrooms. “Everyone. Please.” We all stopped, even the customers. It was 95 degrees outside the tent with 94-percent humidity where he and his wife stood, and inside we were fair glowing.

First-time author Jason A. Peterson held his book up, then clutched it to his heart. Everyone was silent. “I want all of you to know, all of you in the tent, you have made a dream come true.” It took a while for anyone to gain enough composure to get him and his wife a camp chair and some cold water. I believe Mark would have liked that story. But he would have liked even more how I couldn’t tell it to him without a catch in my voice and a struggle. He was the calmest man I have yet known. And I amused him most whenever I got emotional.

That’s our business now as I understand it. We make dreams come true. And that is a big responsibility considering how dreams can go terribly wrong. Our authors in the academy, that community of conversing discoverers, now face pressures that Stephen Marche describes as “like personal climate change, a terminal career illness.” Just the selling copy to Herb Childress’s The Adjunct Underclass from University of Chicago Press can reverse any high you’ve achieved this morning. And last August in the Atlantic, Benjamin Schmidt dropped some sobering realizations for all of us publishing in the humanities.

Mark delivered an especially compelling presentation at one of our annual meetings. He outlined how Virginia coordinated a separate website for the rollout of Charles Dew’s groundbreaking Apostles of Disunion: Southern Secession Commissioners and the Causes of the Civil War (now in a 15th anniversary edition). Mark exhibited an extraordinary level of comradery, author care, and commitment. I felt at times during his talk that he was speaking about his own book, a book he wrote, such was his intensity.

Afterwards, I was complimenting him on the presentation and what it detailed. The campaign, I enthused, what great ideas! He paused and pushed his glasses higher on the bridge of his nose, frowned. “There were so many things I wish had gone better.”

It takes very little to find discouragement and feel isolated in publishing, and this is especially true once you become an author. Having published five works of fiction in seven years with four very different publishers, I will admit there were moments in all those campaigns when I felt I was the only one working on my book, the only one pushing that stone uphill. As a publisher I have been subjected to overhearing senior scholars decry that the only marketing strategy is to make an author do all the work.

If you ever feel this way as an author, please pick up the phone. The number of actions marketing is taking to bring your book to the world will drop your jaw. And so many of them—especially those that create the book’s worldwide online presence—are tedious, time consuming, and seemingly unending.

Whenever I feel down, I point to one of my favorite authors ever, my Marine, Charlie Spillers, and his advice. Charlie picks up the phone, emails, keeps the marketing team apprised. But like the former US Marine he is, with only the most basic instruction, he storms the hill and takes it rather than just pushing a rock around.

I asked other UPM authors what they thought.

Lovejoy Boteler, author of Crooked Snake: The Life and Crimes of Albert Lepard met me at Lemuria Books in Jackson, and said he had been writing a manuscript about the criminal and five-time Parchman escapee who had kidnapped him when Lovejoy was only eighteen. “From submission to acquisition and board approval of my manuscript, through rigorous editing, peer review and conscientious design and marketing, University Press of Mississippi has smoothed the bumps along the road to publication of my first book. All of this was accomplished in less than 18 months. Once the book was available for purchase through the UPM catalog, online and in bookstores, the first edition sold out in a month or two. I couldn’t ask for a more rewarding experience, and I owe a deep measure of gratitude to everyone on the University Press team.”

Ersula J. Ore, author of Lynching: Violence: Rhetoric, and American Identity, said: “Publishing is difficult, and there’s nothing like the difficulties faced by a first-time author. There’s also nothing like a first-time author’s celebratory gif! In February, I requested books be rushed to me while at a conference. Mind you, though, this would be my first time seeing the book in print. When Steve told me the order was “in and baking,” I couldn’t contain myself. I had to gif him a Charlie Kelly classic! His reception was equally ecstatic, and surprised—Steve had never been gif’d! This is all to say, I’ve appreciated how Steve, Vijay Shah, Craig Gill and the rest of the UPM family have shepherded me through the strugglebugs and celebrated the successes.”

Melody Golding, now the author of three books with UPM, said: “Indeed, one of the great things in my life has been working with the University Press of Mississippi. We have a wonderful working relationship that has been so rewarding. With the completion of my third book Life Between the Levees: America’s Riverboat Pilots, it is abundantly clear that the symbiosis between the University Press of Mississippi and me is one in which great books have been created. After my second book I was asked what my next book would be. Steve Yates suggested that I write a book about the river—and in a sense that is what I did except I wrote about life on all of our navigable rivers.”

How did we thank Kevin Haworth, Mark, whom you introduced me to in 2014? UPM responded by making a dream of his come true:

How I wish I could send you a copy of Kevin’s book now, and a little thank you. 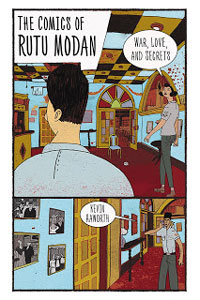 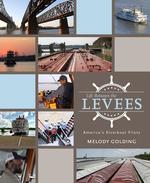 Life Between the Levees 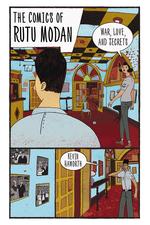 The Comics of Rutu Modan 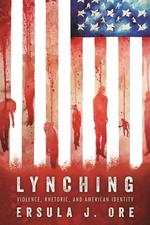 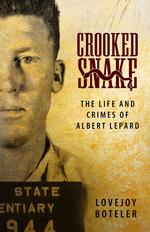 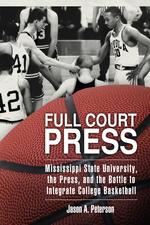 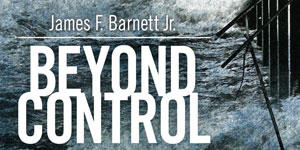 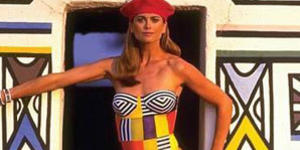