Allen H. Redmon is professor of English and film studies at Texas A&M University–Central Texas. He is editor of Next Generation Adaptation: Spectatorship and Process and coeditor of Clint Eastwood's Cinema of Trauma: Essays on PTSD in the Director’s Films. Redmon serves as president of the Literature/Film Association, an organization that supports and promotes cinema study by encouraging a wide variety of approaches that explore, among other things, the relationship of literature and film. 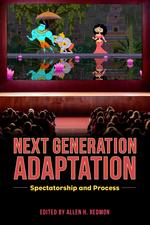