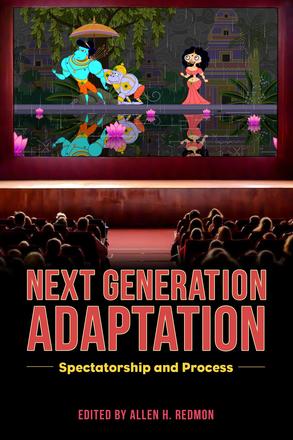 In Next Generation Adaptation: Spectatorship and Process, editor Allen H. Redmon brings together eleven essays from a range of voices in adaptation studies. This anthology explores the political and ethical contexts of specific adaptations and, by extension, the act of adaptation itself. Grounded in questions of gender, genre, and race, these investigations focus on the ways attention to these categories renegotiates the rules of power, privilege, and principle that shape the contexts that seemingly produce and reproduce them.

Contributors to the volume examine such adaptations as Quentin Tarantino’s Death Proof, Jacques Tourneur’s Out of the Past, Taylor Sheridan’s Sicario and Sicario: Day of the Soldado, Jean-Jacques Annaud’s Wolf Totem, Spike Lee’s He’s Got Game, and Jim Jarmusch’s Paterson. Each chapter considers the expansive dialogue adaptations accelerate when they realize their capacity to bring together two or more texts, two or more peoples, two or more ideologies without allowing one expression to erase another. Building on the growing trends in adaptation studies, these essays explore the ways filmic texts experienced as adaptations highlight ethical or political concerns and argue that spectators are empowered to explore implications being raised by the adaptations.