Peter Baida (1950–1999), a Baltimore native, worked for twenty years at Memorial Sloan-Kettering Cancer Center in New York City, for much of that time as the director of direct-mail fundraising. Published in The Gettysburg Review, American Literary Review, The New York Times, American Heritage, and The Atlantic Monthly, he was the author of both fiction and nonfiction, including the book Poor Richard's Legacy: American Business Values from Benjamin Franklin to Donald Trump. 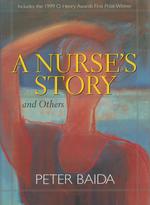 A Nurse's Story and Others