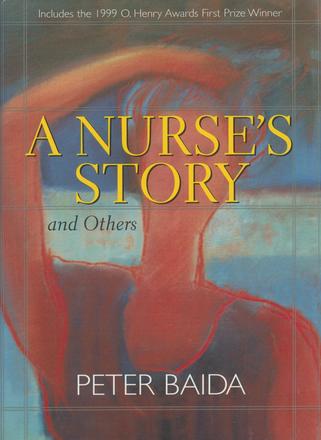 A Nurse's Story and Others

A collection of compelling stories that includes the first-prize winner in the 1999 O. Henry Awards

The lead story in this posthumous book, a revelation of a dying nurse's memories, was the first-prize winner in the 1999 O. Henry Awards. Tragically, within months of receiving this recognition, Peter Baida died at the age of 49.

"What a gifted storyteller we lost when Peter Baida died so young!" said John Barth. "Tough love and unsentimental compassion for the old, infirm, and fallen run through these wise and moving stories. In several of the best of them, one feels a whole novel's worth of life. "

The stories intertwine to form an emotional arc which carries the reader from despair to joy and back again. Baida is unhesitating in his close-up exploration of current social dilemmas. Recurrent in these stories are issues of ethical obligation to those living on the margins of society, the ethics and politics of unions and unionization, the contrasting values of various social classes, and the genuine significance of plain-old ordinary life.

Baida presents both sides of the equation in his stories as supposed social solutions pose additional problems for his characters. He writes serious stories about the inherent duplicity of outcome following even the most well-informed life decisions.

In "No Place to Hide" when confronted by the son of his mother's black housekeeper, a divorced, middle-aged, Jewish man in New York faces the uncertainty of his own life and the complexities of race and friendship.

In "Mr. Moth and Mr. Davenport" as old issues of mob violence and union control resurface among the new realities of old age and loss, an unexpected love affair blossoms for retired residents of a Detroit apartment building.

In "A Doctor's Story" a young man faces his family's past and his own moral confusion during discussions with his dying grandfather, a former Nazi doctor.

Peter Baida (1950-1999), a Baltimore native, worked for twenty years at Memorial Sloan-Kettering Cancer Center in New York City, for much of that time as the director of direct-mail fundraising. Published in The Gettysburg Review, American Literary Review, The New York Times, American Heritage, and The Atlantic Monthly, he was the author of both fiction and nonfiction, including the book Poor Richard's Legacy: American Business Values from Benjamin Franklin to Donald Trump.