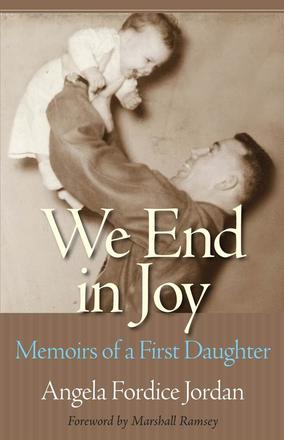 We End in Joy

Memoirs of a First Daughter

The astonishing, uplifting, and hilarious account of maverick Mississippi governor Kirk Fordice and his family

We End in Joy: Memoirs of a First Daughter offers an extraordinary perspective on public life in an intimate account from the daughter of a highly controversial southern governor and a widely beloved first lady.

Angela Jordan enjoyed a comfortable and quiet life in Vicksburg, the small southern town in which she was reared. She was a thirty-five-year-old mother of three daughters, and a woman with a politically liberal bent, when, against all history's odds, Mississippians elected her conservative Republican father, Kirk Fordice, governor in 1991.

Suddenly fate threw the whole Fordice family into the glaring lights of public life. They made headlines, enlivened the 6 o'clock television news, and provided fodder for every dinner table conversation and robust political speculation around the Southeast. As the Governor and First Lady Fordices' longstanding marriage dissolved slowly and publicly over two terms in office, everyone with a newspaper subscription or a cable connection watched the train wreck and high-profile betrayals.

In honest, direct, sometimes poignant, and often funny prose, the author offers a rare glimpse into a profoundly complex family and its painfully public fall from grace. Though the book is the story behind the headlines of one of Mississippi's prominent families, Jordan's narrative will also resonate with anyone who has experienced humiliation, divorce, or loss, whether public or private. Through it all, Jordan finds a story of joy ascendant, and the wonder of discovering that in the deepest sorrow, light and love always shine through.

We End in Joy is a deeply personal and beautifully written memoir--a thoroughly engaging glimpse into a fascinating first family of Mississippi.

I highly recommend We End In Joy by Angela Fordice Jordan, who is the daughter of former Governor Kirk Fordice. Anyone who has an interest in the Fordice family will find this book very informative and entertaining. It is filled with insight into Kirk and Pat Fordice that you will never get anywhere else. Angela is an excellent writer who shares her experiences in the governor's mansion during Kirk's two terms. She also takes the reader through the deaths of both her mother and father in a very warm way. I know there are many Mississippians who want to know more about this popular family. She shares such intimate details as the fact that her parents liked to swim in the nude. Angela's inside story of her father's affair with another woman which led to his divorce is fascinating. She even mentions me, in informing her readers about my famous confrontation with her father. I predict We End In Joy, will hard for you to put down.

Angela Fordice Jordan's frankly astonishing book about her family's odyssey in Mississippi politics is at the core an honest portrait of a complicated family. The book offers keen insights into former Governor Kirk Fordice's driven, outsized personal and political style, but it is the focus on Pat Fordice's pivotal role as matriarch of the Fordice clan that is most rewarding and intriguing. Angela makes the reader share her hard walk through the valley of humiliation and anguish, yet that sad journey ends at a curious destination of redemption and hope.