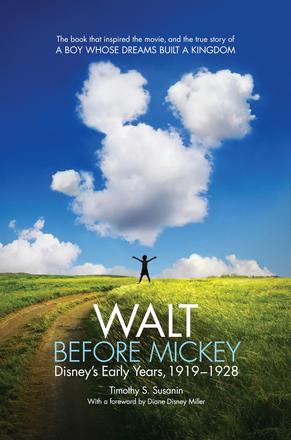 The untold story of ten critical, formative years in the great producer's life

For ten years before the creation of Mickey Mouse, Walt Disney struggled with, failed at, and eventually mastered the art and business of animation. Most biographies of his career begin in 1928, when Steamboat Willie was released. That first Disney Studio cartoon with synchronized sound made its main character—Mickey Mouse—an icon for generations.

But Steamboat Willie was neither Disney's first cartoon nor Mickey Mouse's first appearance. Prior to this groundbreaking achievement, Walt Disney worked in a variety of venues and studios, refining what would become known as the Disney style. In Walt before Mickey: Disney's Early Years, 1919–1928, Timothy Susanin creates a portrait of the artist from age seventeen to the cusp of his international renown.

After serving in the Red Cross in France after World War I, Walt Disney worked for advertising and commercial art in Kansas City. Walt used these experiences to create four studios—Kaycee Studios, Laugh-O-gram Films, Disney Brothers Studio, and Walt Disney Studio. Using company documents, private correspondence between Walt and his brother Roy, contemporary newspaper accounts, and new interviews with Disney's associates, Susanin traces Disney's path. The author shows Disney to be a complicated, resourceful man, especially during his early career. Walt before Mickey, a critical biography of a man at a crucial juncture, provides the “missing decade” that started Walt Disney's career and gave him the skills to become a name known worldwide.

Real film-history research is hard and tedious work; it often involves endless hours of digging through old journals and documents, searching for some elusive detail. My hat is off to Tim Susanin for his painstaking labors to illuminate the obscure corners of Walt Disney's early career. Thanks to his efforts, dates, names, and other previously unknown details of Walt's early years have been brought into the open.

- J. B. Kaufman, author of South of the Border with Mickey: Walt Disney and the Good Neighbor Program, 1941-1948 and (with Russell Merritt) Walt in Wonderland: The Silent Films of Walt Disney

Tim Susanin has unearthed a goldmine of information that enables us to focus on Walt Disney's early career as we've never been able to before. He has dug deep and come up with details and colorful material that deepen our understanding of the man. Bravo!

- Leonard Maltin, author of The Disney Films and Of Mice and Magic: A History of American Animated Cartoons

What a monumental work, and a very accurate one. No one has ever gone into as much detail on Walt's early life. This will be a joy to researchers for years to come.

Walt Disney was a man in movement, someone whose exceptional energy and curiosity permitted him to create great animated features and the extraordinary Disneyland park. Tim Susanin gives us our closest look yet at Walt when he was just starting to become that great visionary of the middle of the twentieth century. His book is a chronicle of Walt Disney in the 1920s, when he was just starting up Hollywood's ladder--whose lowest rungs happened to be in Kansas City. We meet many of Walt's friends and colleagues, too, people who have been little more than names in earlier biographies and studio histories but whose stories are told here in unprecedented detail. This book does a superb job of tracking the restless young Walt Disney through the decade of triumphs and trials that preceded the great turning point in his life: the creation of Mickey Mouse.

- Michael Barrier, author of The Animated Man: A Life of Walt Disney and Hollywood Cartoons: American Animation in its Golden Age

The men and women who surrounded Walt in the 1920s come to life as never before thanks to Tim Susanin. Meticulously researched and easy to read, Walt before Mickey is bound to shape the history of Walt's early days for years to come.

- Didier Ghez, editor of the series Walt's People: Talking Disney with the Artists Who Knew Him

I have always loved to hear my dad talk about his life, especially the early part . . . his childhood, family, the Kansas City days, and especially how he met and courted my mother. Tim [Susanin] has done an amazing job of chronicling the lives of the people in that period who affected Dad's life. His research brought out the fact that some of Dad's early benefactors were his neighbors on Bellefontaine, people who had seen him grow up and were aware of his industrious nature. Dad, it appears, was never shy about asking for a loan. But he was diligent about repaying it . . .

Tim continues on for several more years, all exciting for the brothers and their wives, though not without periods of anxiety. He ends with the loss of Oswald the Rabbit and the creation of Mickey Mouse. Dad's telegram to Roy as he, with my mother, was about to depart New York for home was 'Leaving tonight stopping over KC arrive home Sunday morning seven thirty don't worry everything OK will give details when arrive--Walt. ' He didn't mention the fact that they had lost Oswald. They would need a new plan, a new character. Roy, who had been caring for my parents' chow dog Sunnee, recalls that nothing was said until Roy inquired, 'Tell me about it, kid . . . What kind of deal did you make?' 'We haven't got a deal,' Dad cheerfully replied. 'We're going to start a new series. '

- From the foreword by Diane Disney Miller