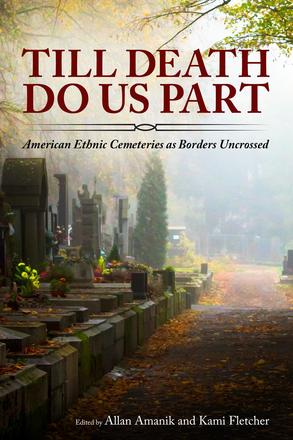 Till Death Do Us Part

Grief, Mourning, Race, and National Memorial: A Conversation with the co-editors of TILL DEATH DO US PART

Till Death Do Us Part: American Ethnic Cemeteries as Borders Uncrossed explores the tendency among most Americans to separate their dead along communal lines rooted in race, faith, ethnicity, or social standing and asks what a deeper exploration of that phenomenon can tell us about American history more broadly.

Comparative in scope, and regionally diverse, chapters look to immigrants, communities of color, the colonized, the enslaved, rich and poor, and religious minorities as they buried kith and kin in locales spanning the Northeast to the Spanish American Southwest. Whether African Americans, Muslim or Christian Arabs, Indians, mestizos, Chinese, Jews, Poles, Catholics, Protestants, or various whites of European descent, one thing that united these Americans was a drive to keep their dead apart. At times, they did so for internal preference. At others, it was a function of external prejudice.

Invisible and institutional borders built around and into ethnic cemeteries also tell a powerful story of the ways in which Americans have negotiated race, culture, class, national origin, and religious difference in the United States during its formative centuries.

"Till Death Do Us Part is an interesting collection on the history of ethnic cemeteries in the US. Edited by Amanik (Judaic studies, Brooklyn College, CUNY) and Fletcher (history, Albright College), the book illustrates how ethnic cemeteries have reflected and reinforced the social border constructed by and imposted upon various racial and ethnic communities. "

"Allan Amanik and Kami Fletcher have produced a fascinating and timely volume on the history of American cemeteries that deepens our understanding of ethnic burial practices and demonstrates the richness of death studies. "

"Till Death Do Us Part is an urgently important collection. With case studies focused on a wide range of ethnic and religious groups, this volume explores more deeply than any previous work the cultural divisions that cemeteries both reflect and reinforce. Anyone interested in the social history of the nineteenth- and twentieth-century United States will profit from these chapters. "

- Erik R. Seeman, author of Speaking with the Dead in Early America

"Till Death Do Us Part is a groundbreaking contribution to the fields of both death studies and ethnic studies in the United States. In this provocative collection of essays, the myth of America’s ethnic ‘melting pot’ gets completely dispelled through insightful analysis of burial practice within immigrant, racial, and faith-based communities. The histories of how these minority groups asserted their humanity within the borders of their own cemeteries is a powerful testament to resilience in the face of prejudice and xenophobia. This is a pertinent book that speaks directly to contemporary debates about immigration, race relations, and religious freedom in our times. "

- Suzanne E. Smith, author of To Serve the Living: Funeral Directors and the African American Way of Death

"With this anthology, Allan Amanik and Kami Fletcher have assembled a collection of essays that explores the tendency toward separation embodied in the burial practices of communal groups and the many factors that underpin that tendency. In so doing, they inspire us to more closely examine the burial spaces in our midst. Much more than collections of monuments, they are cultural landscapes that can help us to better understand the ways in which people negotiate and structure space and memory, and their reasons for doing so. "

- Dennis Montagna, president of the Association for Gravestone Studies