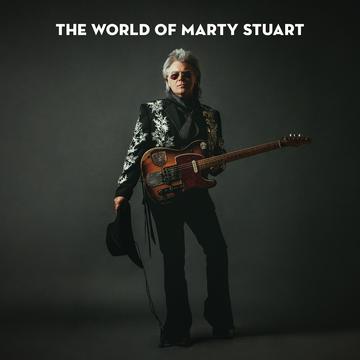 An awe-inspiring collection that explores the life and legacy of a beloved star, storyteller, collector, photographer, and chief country music historian

In the late 1960s in Philadelphia, Mississippi, nine-year-old Marty Stuart started his first band and began playing country music and collecting treasures of the culture. More than a half century later, the Mississippi Department of Archives and History has partnered with the country musician and ambassador to share his story and collection with the public in an exhibition and tandem publication.

Marty Stuart has worked with the legends of country music, from his early days playing with Lester Flatt and Johnny Cash to his successful collaboration with Travis Tritt and his celebrated return to American roots music with his band, the Fabulous Superlatives. The World of Marty Stuart traces the life and times of Marty Stuart through essays, photographs, and reproductions of artifacts from his extensive collection, highlights of which include Stuart’s first guitar, Hank Williams’s original handwritten manuscripts, guitars from Carl Perkins and Pops Staples, numerous costumes including Porter Wagoner’s suit and Dolly Parton’s dress, personal items from Patsy Cline, Johnny Cash, and Connie Smith, and much more.

The story unfolds in seven sections: Philadelphia (1958–1972); Nashville Cat (1972–1979); Marty Stuart Meets the Man in Black (1980–1985); Hillbilly Rock (1986–1996); The Pilgrim (1997–2001); “Ladies and Gentlemen, Marty Stuart and His Fabulous Superlatives” (2001–2022); and Full Circle (Touching Home) (2001–2022). Photography by Marty’s mother, Hilda Stuart, and by Marty himself appears throughout the book, illuminating moments from the past five decades. The World of Marty Stuart examines this journey in a personal way, providing an up-close glimpse at important moments in country music and reaffirming Stuart’s dedication to preserving the genre’s rich history.

"There are those among us who make history and those who keep it. Marty Stuart does both. He was a child prodigy whose musicianship has only increased along with his renown. Although just twelve years old when his career began, Stuart was well-schooled in the history of America’s vernacular music. Within a year, he was living and working with many of the most revered talents in country music. His desire to savor his encounters with music legends prompted him to borrow a camera from his mother, a photographer of considerable talent herself. His natural aptitude for photography matured quickly. He became the keeper of the flame, a visual historian of country music and a collector of related artifacts. "