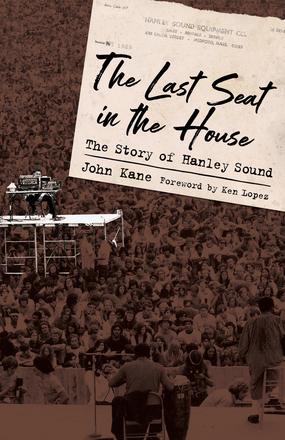 The Last Seat in the House

The Story of Hanley Sound

Known as the "Father of Festival Sound," Bill Hanley (b. 1937) made his indelible mark as a sound engineer at the 1969 Woodstock Music and Arts Fair. Hanley is credited with creating the sound of Woodstock, which literally made the massive festival possible. Stories of his on-the-fly solutions resonate as legend among festivalgoers, music lovers, and sound engineers. Since the 1950s his passion for audio has changed the way audiences listen to and technicians approach quality live concert sound.

John Kane examines Hanley’s echoing impact on the entire field of sound engineering, that crucial but often-overlooked carrier wave of contemporary music. Hanley’s innovations founded the sound reinforcement industry and launched a new area of technology, rich with clarity and intelligibility. By the early seventies the post-Woodstock festival mass gathering movement collapsed. The music industry shifted, and new sound companies surfaced. After huge financial losses and facing stiff competition, Hanley lost his hold on a business he helped create. By studying both his history during the festivals and his independent business ventures, Kane seeks to present an honest portrayal of Hanley and his acumen and contributions.

Since 2011, Kane conducted extensive research, including over one hundred interviews with music legends from the production and performance side of the industry. These carefully selected respondents witnessed Hanley’s expertise at various events and venues like Lyndon B. Johnson’s second inauguration, the Newport Folk/Jazz Festivals, the Beatles' final tour of 1966, the Fillmore East, Madison Square Garden, and more. The Last Seat in the House will intrigue and inform anyone who cares about the modern music industry.

"There is a slicker, punchier, shorter read hidden within The Last Seat in the House, but if you want the full tour – Access All Areas – of Bill Hanley, Hanley Sound Inc, the emergence of the live sound industry in America, and all the key events surrounding it, then John Kane has the ticket. "

"Hanley’s story from Kane’s point of view starts with the notion of Hanley as a disruptor of technology and as innovator in business leadership. Set over 450 pages, the book takes the reader on a multi-tracked journey, satisfying both audiophile and music fans alike. "

"I have three books in queue for book reviews, and stacks of books for fun or to make me a better person besides my bed and on the floor under my desk, but The Last Seat in the House is the one I keep picking up and thinking about. Author John Kane gives us a fascinating story of the development of sound amplification for large concerts and events—mainly rock concerts, but also pop, folk, jazz, and orchestral music, plus presidential inaugurations, political rallies, and anti-war protests—primarily by tracing the career of Bill Hanley, the founder of Hanley Sound, the company that provided the sound system for the Woodstock Music and Art Fair. "

"John Kane definitively captures the spirit of what it felt like for musicians on stage during the metamorphosis of sound reproduction in the sixties. Through the eyes and ears of Bill Hanley, whom so many of us thought of as a magician, John weaves a tale that is essential historically, microscopically pure in substance, and grand in scale. I was there. John captures these astounding moments in sound beautifully and with the passion that the subject deserves. If your interest, like so many, has been piqued by the music of the sixties, you will love this book. Thanks, John, for making us remember and for bringing this story to the audience it finally deserves. "

"From Washington, DC, to Woodstock, Bill Hanley was the best sound in the solar system. Uber awesome and amazing. "

"Music lovers will find this book essential reading, with stories of Mr. Hanley striving to provide first-rate sound at concert venues like Woodstock, the Newport Festivals, and the Beatles’ final tour, to mention a few. Bill Hanley is a real pioneer! Bill and brother Terry worked with my band, the Remains, in the mid-sixties, and I can say firsthand that they far exceeded any sound company we ever worked with. Until reading this book I didn’t realize the importance of what they were doing. "

"This is the story of one man’s quest to provide good sound for an audience. It is the story of the creation of an industry, a journey with a rise and fall. It’s not overly technical, but it is deeply researched and well written. This story is about tenacity and invention and follows the rise of cultural events like tours by the Beatles and the Rolling Stones, festivals like Woodstock, and venues like the Fillmore East and the Café au Go Go. Come along for the ride. . . . "

"The Last Seat in the House: The Story of Hanley Sound by John Kane is a must-read for anyone interested in live concert sound and its history. It is brutally honest and full of documented fascinating facts. "