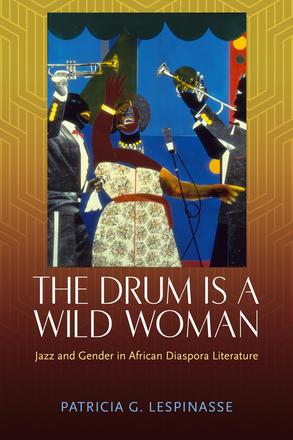 A repositioning, reinvention, and reclamation of jazz writing by powerful women writers

In 1957, Duke Ellington released the influential album A Drum Is a Woman. This musical allegory revealed the implicit truth about the role of women in jazz discourse—jilted by the musician and replaced by the drum. Further, the album’s cover displays an image of a woman sitting atop a drum, depicting the way in which the drum literally obscures the female body, turning the subject into an object. This objectification of women leads to a critical reading of the role of women in jazz music: If the drum can take the place of a woman, then a woman can also take the place of a drum.

The Drum Is a Wild Woman: Jazz and Gender in African Diaspora Literature challenges that image but also defines a counter-tradition within women’s writing that involves the reinvention and reclamation of a modern jazz discourse. Despite their alienation from bebop, women have found jazz music empowering and have demonstrated this power in various ways. The Drum Is a Wild Woman explores the complex relationship between women and jazz music in recent African diasporic literature. The book examines how women writers from the African diaspora have challenged and revised major tropes and concerns of jazz literature since the bebop era in the mid-1940s. Black women writers create dissonant sounds that broaden our understanding of jazz literature. By underscoring the extent to which gender is already embedded in jazz discourse, author Patricia G. Lespinasse responds to and corrects narratives that tell the story of jazz through a male-centered lens. She concentrates on how the Wild Woman, the female vocalist in classic blues, used blues and jazz to push the boundaries of Black womanhood outside of the confines of respectability. In texts that refer to jazz in form or content, the Wild Woman constitutes a figure of resistance who uses language, image, and improvisation to refashion herself from object to subject.