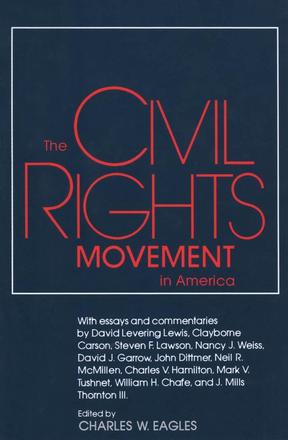 The Civil Rights Movement in America

A collection of essays analyzing and emphasizing the origins, strategies, creative tensions, and politics of the Civil Rights Movement

The Civil Rights Movement warrants continuing and extensive examination. The six papers in this collection, each supplemented by a follow-up assessment, contribute to a clearer perception of what caused and motivated the movement, of how it functioned, of the changes that occurred within it, and of its accomplishments and shortcomings. Its profound effect upon modern America has so greatly changed relations between the races that C. Vann Woodward has called it the “second revolution.”

In a limited space, the eleven scholars range with a definitive view over a large subject. Their papers analyze and emphasize the Civil Rights Movement's important aspects: its origins and causes, its strategies and tactics for accomplishing black freedom, the creative tensions in its leadership, the politics of the movement in the key state of Mississippi, and the role of federal law and federal courts.

In this collection a scholarly balance is achieved for each paper by a follow-up commentary from a significant authority. By deepening the understanding of the Civil Rights Movement, these essays underscore what has been gained through struggle, as well as acknowledging the goals that are yet to be attained.

Other Books By Charles W. Eagles