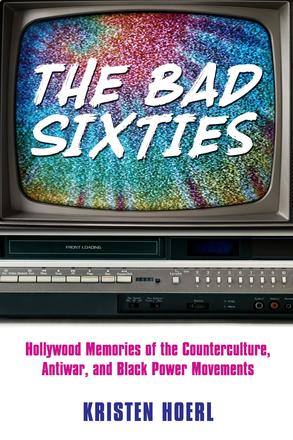 Hollywood Memories of the Counterculture, Antiwar, and Black Power Movements

Ongoing interest in the turmoil of the 1960s clearly demonstrates how these social conflicts continue to affect contemporary politics. In The Bad Sixties: Hollywood Memories of the Counterculture, Antiwar, and Black Power Movements, Kristen Hoerl focuses on fictionalized portrayals of 1960s activism in popular television and film. Hoerl shows how Hollywood has perpetuated politics deploring the detrimental consequences of the 1960s on traditional American values. During the decade, people collectively raised fundamental questions about the limits of democracy under capitalism. But Hollywood has proved dismissive, if not adversarial, to the role of dissent in fostering progressive social change.

Film and television are salient resources of shared understanding for audiences born after the 1960s because movies and television programs are the most accessible visual medium for observing the decade's social movements. Hoerl indicates that a variety of television programs, such as Family Ties, The Wonder Years, and Law and Order, along with Hollywood films, including Forrest Gump, have reinforced images of the "bad sixties. " These stories portray a period in which urban riots, antiwar protests, sexual experimentation, drug abuse, and feminism led to national division and moral decay. According to Hoerl, these messages supply distorted civics lessons about what we should value and how we might legitimately participate in our democracy.

These warped messages contribute to "selective amnesia," a term that stresses how popular media renders radical ideas and political projects null or nonexistent. Selective amnesia removes the spectacular events and figures that define the late-1960s from their motives and context, flattening their meaning into reductive stereotypes. Despite popular television and film, Hoerl explains, memory of 1960s activism still offers a potent resource for imagining how we can strive collectively to achieve social justice and equality.

"The Bad Sixties is a timely and important intervention into the contemporary literature about the representational politics of social movement politics and counterculture in the Long Sixties. Hoerl provides a lively and entertaining discussion of the sixties after they ended and a smart and engaging assessment of their circulation in the eighties as neoconservative culture undermined the representational power of their political edge. "

"While some sixties radicals demanded ‘all power to the imagination,’ Kristen Hoerl shows that Hollywood’s imagination too often aligns with the powerful. This smart look at three decades of film and TV representations demonstrates the lasting influence of late sixties social and cultural movements. Her close read of the culture industry’s selective amnesia reminds us that the future is often decided on the terrain of memory. "