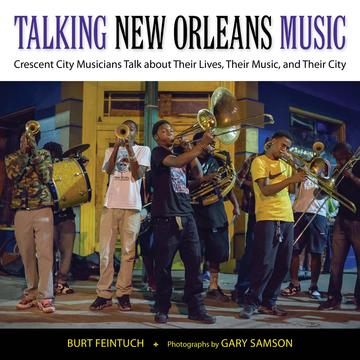 Crescent City Musicians Talk about Their Lives, Their Music, and Their City

In Talking New Orleans Music, author Burt Feintuch has pursued a decades-long fascination with the music of this singular city. Thinking about the devastation—not only material but also cultural—caused by the levees breaking in 2005, he began a series of conversations with master New Orleans musicians, talking about their lives, the cultural contexts of their music, their experiences during and after Katrina, and their city. Photographer Gary Samson joined him, adding a compelling visual dimension to the book.

Talking New Orleans Music is a compelling compendium of oral history interviews by Burt Feintuch with a cross-section of iconic New Orleans musicians (and a record producer), duly enhanced by Gary Samson's glorious color photographs. The value of this volume inheres in the respect given by the authors to the diverse personalities and accomplishments of the respective informants--their storytelling is richly informative and entertaining and goes to the heart of what makes New Orleans culture so vibrant and tenacious.

- William R. Ferris, author of Give My Poor Heart Ease: Voices of the Mississippi Blues