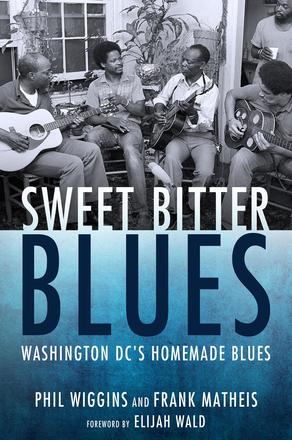 The first-ever account of the Washington, DC, blues scene

Sweet Bitter Blues: Washington, DC’s Homemade Blues depicts the life and times of harmonica player Phil Wiggins and the unique, vibrant music scene around him, as described by music journalist Frank Matheis. Featuring Wiggins’s story, but including information on many musicians, the volume presents an incomparable documentary of the African American blues scene in Washington, DC, from 1975 to the present.

At its core, the DC-area acoustic “down home” blues scene was and is rooted in the African American community. A dedicated group of musicians saw it as their mission to carry on their respective Piedmont musical traditions: Mother Scott, Flora Molton, Chief Ellis, Archie Edwards, John Jackson, John Cephas, and foremost Phil Wiggins. Because of their love for the music and willingness to teach, these creators fostered a harmonious environment, mostly centered on Archie Edwards’s famous barbershop where Edwards opened his doors every Saturday afternoon for jam sessions.

Sweet Bitter Blues features biographies and supporting essays based on Wiggins’s recollections and supplemented by Matheis’s research, along with a foreword by noted blues scholar Elijah Wald, historic interviews by Dr. Barry Lee Pearson with John Cephas and Archie Edwards, and previously unpublished and rare photographs. This is the story of an acoustic blues scene that was and is a living tradition.

"Sweet Bitter Blues by Phil Wiggins and Frank Matheis is a great and thoughtful read. Reading this book gives me an even better appreciation for Phil’s music. He’s a true bluesman, and I recommend this book to EVERYBODY!"

"A unique exploration of the history and development of a distinctive African American blues community from the perspective of an artist who was initiated into the music, thrived there, and went on to bring world-wide recognition to himself and scene. "

"The highest compliment I can make of this book, besides how much I enjoyed reading it, is that I learned so much about the DC acoustic blues scene. It is also handsomely illustrated. Sweet Bitter Blues is an invaluable addition to the literature about the blues. "

"Wiggins and Matheis are to be commended for this fine volume on an important musical community that continues to extend and honor the blues traditions of the Piedmont region. His unflinching candor mixed with a palpable sense of joy at where life has taken him makes Wiggins’s recollections a joy to read. "

"This is an instant classic: one of those books that offers revelation after revelation, both on the autobiographical level (it's Phil's story) and on a broader cultural level (it's the first deep-and-wide history of Washington, DC's acoustic blues scene). Absolutely first rate. I can't imagine a serious blues fan who won't want a copy. "

- Adam Gussow, author of Mister Satan's Apprentice: A Blues Memoir and Beyond the Crossroads: The Devil and the Blues Tradition, and subject of a documentary about his longtime blues duo, entitled Satan & Adam, currently screening on Netflix

"A fascinating first-person account of the Piedmont blues scene over the past forty-plus years from the eyes of one of the scene’s most important players. Full of details and deeply personal stories from Phil Wiggins’s decades of playing with not only his long-time partner John Cephas, but also nearly every other traditional blues artist in the region. "

"Phil Wiggins and Frank Matheis are great storytellers. I have known some of the Washington, DC acoustic blues illuminati that Sweet Bitter Blues talks about and others not at all. Phil’s words are so personal and brutally, lovingly honest. Phil Wiggins has survived to tell the tale. This book is a treasure. "

"It's nice to wander down the path our elders blazed before us. Sweet Bitter Blues is a quintessential read for any blues lover. "

"Rarely is the Piedmont region discussed with any seriousness concerning the blues. This is corrected once and for all by Sweet Bitter Blues: Washington, DC’s Homemade Blues. This book is culturally priceless, and its history should be enshrined in every mention of the blues. "

- Bruce Conforth, professor of American culture, founding curator of the Rock and Roll Hall of Fame and Museum, and coauthor of Up Jumped the Devil: The Real Life of Robert Johnson

"Blues scholarship has been slowly evolving in the past two decades, and Sweet Bitter Blues, cowritten by Washington, DC blues harmonica player Phil Wiggins and White blues connoisseur Frank Matheis, is a welcome addition to the literature."

"Wiggins’s account is rich with references to such vanished institutions as the Pigfoot Club on Hamlin Street NE, the Ontario Place Coffee House, the Unicorn Times arts newspaper, and Chinatown’s Ruby Restaurant, where the musicians ate pre- and post-performance. This journey in space and time is especially pleasurable because Wiggins’s writing can be as incisive and evocative as his harmonica lines."