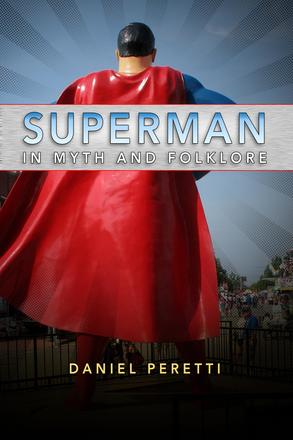 Superman in Myth and Folklore

Superman rose from popular culture—comic books, newspaper strips, radio, television, novels, and movies—but people have so embraced the character that he has now become part of folklore. This transition from popular to folk culture signals the importance of Superman to fans and to a larger American populace. Superman’s story has become a myth dramatizing identity, morality, and politics.

Many studies have examined the ways in which folklore has provided inspiration for other forms of culture, especially literature and cinema. In Superman in Myth and Folklore, Daniel Peretti explores the meaning of folklore inspired by popular culture, focusing not on the Man of Steel’s origins but on the culture he has helped create. Superman provides a way to approach fundamental questions of human nature, a means of exploring humanity’s relationship with divinity, an exemplar for debate about the type of hero society needs, and an articulation of the tension between the individual and the community.

Through examinations of tattoos, humor, costuming, and festivals, Peretti portrays Superman as a corporate-owned intellectual property and a model for behavior, a means for expression and performance of individual identity, and the focal point for disparate members of fan communities. As fans apply Superman stories to their lives, they elevate him to a mythical status. Peretti focuses on the way these fans have internalized various aspects of the character. In doing so, he delves into the meaning of Superman and his place in American culture and demonstrates the character’s staying power.

Superman fans, together with students of the two-way relationship between folklore and popular culture, will all enjoy and learn from this original, accessibly written, and frankly rather fun book.