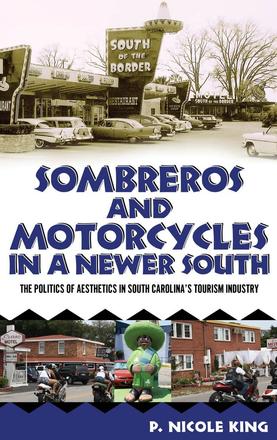 Sombreros and Motorcycles in a Newer South

The Politics of Aesthetics in South Carolina's Tourism Industry

In 1949, Alan Schafer opened South of the Border, a beer stand located on bucolic farmland in Dillon County, South Carolina, near the border separating North and South Carolina. Even at its beginning, the stand catered to those interested in Mexican-themed kitsch--sombreros, toy piñatas, vividly colored panchos, salsas. Within five years, the beer stand had grown into a restaurant, then a series of restaurants, and then a theme park, complete with gas stations, motels, a miniature golf course, and an adult-video shop. Flashy billboards--featuring South of the Border's stereotypical bandit Pedro--advertised the locale from 175 miles away.

An hour south of Schafer's site lies the Grand Strand region--sixty miles of South Carolina beaches and various forms of recreation. Within this region, Atlantic Beach exists. From the 1940s onward, Atlantic Beach has been a primary tourist destination for middle-class African Americans, as it was one of the few recreational beaches open to them in the region. Since the 1990s, the beach has been home to the Atlantic Beach Bikefest, a motorcycle festival event that draws upward of 10,000 African Americans and other tourists annually.

Sombreros and Motorcycles in a Newer South studies both locales, separately and together, to illustrate how they serve as lens for viewing the historical, social, and aesthetic aspects embedded in a place's culture over time. In doing so, author Nicole King engages with concepts of the "Newer South," the contemporary era of southern culture which integrates Old South and New South history and ideas about issues such as race, taste, and regional authenticity. Tracing South Carolina's tourism industry through these locales, King analyzes the collision of southern identity and place with national, corporatized culture from the 1940s onward. Sombreros and Motorcycles in a Newer South locates campy but historic tourist sites that serve as important texts for better understanding how culture moves and more inclusive notions of what it means to be southern today.

"Pedro was born in a beer depot. Constructed just over a dry-county line, what would become South of the Border flourished with the construction of Interstate 95. But another national project, desegregation, caused a different enclave to wither: Atlantic Beach, a lively refuge for African Americans about seventy miles away. P. Nicole King deserves credit for seeing these as a pair of 'touriscapes' (her perceptive term), and for illuminating them with abundant scholarship laced with appreciation. "

--Randall A. Wells, author of Along the Waccamaw: A Yankee Discovers a Home by the River

"Rather than allowing us to speed past the kitsch, P. Nicole King forces us to pull over and contemplate the complex racial histories underlying South of the Border and Atlantic Beach. Whether birthed by a Jewish entrepreneur or African American professionals, respectively, both sites stand as significant historical landscapes that challenged Jim Crow and thereby birthed a Newer South tied to the global tourism market. This book is a must-see. "

--Anthony J. Stanonis, author of Creating the Big Easy: New Orleans and the Emergence of Modern Tourism, 1918-1945; and Dixie Emporium: Tourism, Foodways, and Consumer Culture in the American South