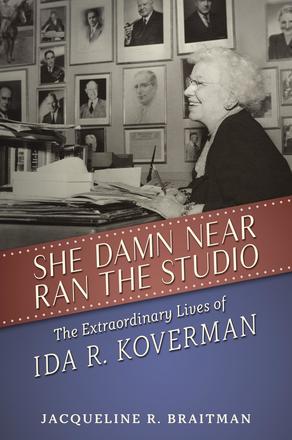 Best known as the woman who “ran MGM,” Ida R. Koverman (1876–1954) served as talent scout, mentor, executive secretary, and confidant to American movie mogul Louis B. Mayer for twenty-five years. She Damn Near Ran the Studio: The Extraordinary Lives of Ida R. Koverman is the first full account of Koverman’s life and the true story of how she became a formidable politico and a creative powerhouse during Hollywood’s Golden Era.

For nearly a century, Koverman’s legacy has largely rested on a mythical narrative while her more fascinating true-life story has remained an enduring mystery—until now. This story begins with Koverman’s early years in Ohio and the sensational national scandal that forced her escape to New York where she created a new identity and became a leader among a community of women. Her second incarnation came in California where she established herself as a hardcore political operative challenging the state’s progressive impulse. During the Roaring Twenties, she was a key architect of the Southland’s conservative female-centric partisan network that refashioned the course of state and national politics and put Herbert Hoover in the White House. As “the political boss of Los Angeles County,” she was the premiere matchmaker in the courtship between Hollywood and national partisan politics, which, as Mayer’s executive secretary, was epitomized by her third incarnation as “one of the most formidable women in Hollywood,” whose unparalleled power emanated from her unique perch inside the executive suite of Metro-Goldwyn-Mayer.

Free to adapt her managerial skills and political know-how on behalf of the studio, she quickly drew upon her artistic sensibilities as a talent scout, expanding MGM’s catalog of stars and her own influence on American popular culture. Recognized as “one of the invisible power centers in both MGM and the city of Los Angeles,” she nurtured the city’s burgeoning performing arts by fostering music and musicians and the public financing of them. As the “lioness” of MGM royalty, Ida Koverman was not just a naturalized citizen of the Hollywood kingdom; at times during her long reign, she “damn near ran the studio. ”

"Historian Braitman illuminates the woman behind one of Golden Age Hollywood’s most powerful moguls in this revealing biography. . . . Both women’s history and film buffs will be fascinated by Braitman’s account. "

"Koverman was the godmother of the MGM musicals, and this biography bestows on her long-overdue credit for her immeasurable contributions to 20th-century culture. "

"This book is a valuable addition to any reference bookshelf and a significant story about women’s place in society during the early 20th century. "

"Jacqueline R. Braitman’s impressive research and wide lens finally brings into focus Ida R. Koverman, a Hollywood insider whose power was previously viewed only in fleeting glimpses. Braitman’s discovery of Koverman’s early career as a political operative, and its link to her subsequent influence at MGM, exposes how female power could be hidden in plain sight, not only in the movie industry but in twentieth-century America. "

- Karen Ward Mahar, professor of history and cochair of the American studies program at Siena College and author of Women Filmmakers in Early Hollywood

"Through painstaking research and an agile blend of political, societal, and cultural analysis, Jacqueline R. Braitman paints a fascinating portrait of a complex woman who—though ignored by earlier historians—should rightly be credited for important contributions to the US film industry and American political life during the twentieth century and, for better or worse, serving as an early matchmaker between the two. Spanning the greater part of a century, from the Gilded Age to the McCarthy era, She Damn Near Ran the Studio represents a unique contribution to scholarship on the history of women in film, classical Hollywood, and modern American politics. "

- Erin Hill, assistant professor of media and popular culture at University of California San Diego and author of Never Done: A History of Women's Work in Media Production

"She Damn Near Ran the Studio: The Extraordinary Lives of Ida R. Koverman sheds welcome light on a powerful woman who has remained too long in the shadow of her boss, Louis B. Mayer of MGM. Author Jacqueline R. Braitman not only reveals backstage Hollywood intrigue and Koverman’s influence on prominent careers, but also the close ties between the movie industry and right-wing Republican politics. Along the way, she traces the new professional and political roles open to women in the early twentieth century, the rise of Los Angeles as a cultural mecca, and the complicated interaction of art, commerce, and politics in Hollywood—all in the remarkable life of Ida R. Koverman. "

"Thanks to the pioneering research of Jacqueline R. Braitman, we now know not only the full story of Ida R. Koverman in Hollywood, but also the full record of her career in Californian and national Republican politics. It is extraordinary that a woman such as Koverman held such power and influence, and equally extraordinary is how this book presents us with the full, untrammeled story. "

"She Damn Near Ran the Studio is significant in its discussions of women’s contributions to American politics and the moving picture industry. Until very recently, women’s work in American film following the 1920s has been overlooked by many a film scholar; and in this regard, Braitman’s book is a substantial piece of scholarship."

"Braitman’s She Damn Near Ran the Studio contains notes and an extensive bibliography and is essential reading for scholars interested in Hollywood history, women in Hollywood, and women in politics."

"We can still see Koverman’s legacy every day. Starting in California, she helped shape the modern Republican Party, especially in its conservative Sunbelt incarnation. Her brilliance at finding and nurturing talent bequeathed us scores of unforgettable films that are part of our collective vocabulary and cultural memory. . . . Jacqueline R. Braitman’s She Damn Near Ran the Studio vividly shows how the remarkable Ida Koverman made it all happen."