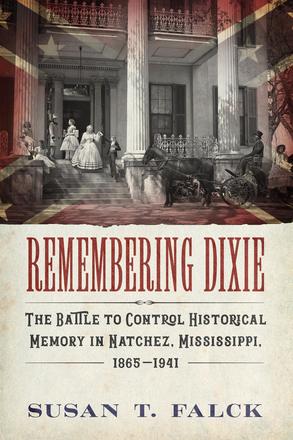 The Battle to Control Historical Memory in Natchez, Mississippi, 1865–1941

Nearly seventy years after the Civil War, Natchez, Mississippi, sold itself to Depression-era tourists as a place “Where the Old South Still Lives. ” Tourists flocked to view the town’s decaying antebellum mansions, hoopskirted hostesses, and a pageant saturated in sentimental Lost Cause imagery.

In Remembering Dixie: The Battle to Control Historical Memory in Natchez, Mississippi, 1865–1941, Susan T. Falck analyzes how the highly biased, white historical memories of what had been a wealthy southern hub originated from the experiences and hardships of the Civil War. These collective narratives eventually culminated in a heritage tourism enterprise still in business today. Additionally, the book includes new research on the African American community’s robust efforts to build historical tradition, most notably, the ways in which African Americans in Natchez worked to create a distinctive postemancipation identity that challenged the dominant white structure.

Using a wide range of late nineteenth- and early twentieth-century sources—many of which have never been fully mined before—Falck reveals the ways in which black and white Natchezians of all classes, male and female, embraced, reinterpreted, and contested Lost Cause ideology. These memory-making struggles resulted in emotional, internecine conflicts that shaped the cultural character of the community and impacted the national understanding of the Old South and the Confederacy as popular culture.

Natchez remains relevant today as a microcosm for our nation’s modern-day struggles with Lost Cause ideology, Confederate monuments, racism, and white supremacy. Falck reveals how this remarkable story played out in one important southern community over several generations in vivid detail and richly illustrated analysis.

"[Remembering Dixie] instantiates at ground level, with astounding immediacy, the momentous issues Natchez residents, and indeed all Americans, faced after the Civil War."

"Remembering Dixie crosses many boundaries to show nuanced and descriptive details of historical memory creation and heritage tourism. Here one finds antebellum exaltation, images of dress and architecture, as well as the many steps involved as a group of white women taught themselves to promote their city and their version of the past. At the same time, the book also shows another side—the many African Americans who, at first after the Civil War, believed in the dream of their participation in a democratic country, who also could have shaped the way the town of Natchez came to be a stop on the public landscape of American politics and history. In total, here is a vivid collective and local account of the past that also still shapes our national memory."

- Susan Tucker, author of City of Remembering: A History of Genealogy in New Orleans

"Remembering Dixie is a beautifully written book detailing how the white residents of Natchez, Mississippi, in the late nineteenth and first half of the twentieth century enshrined a mythic memorialization of the Civil War and the antebellum South as entertainment and spectacle. This memory-making crusade pitted like-minded white men and women in often internecine conflicts over how the city’s past would be fashioned, marketed, and profited from. Remembering Dixie also illuminates how African Americans in Natchez tried to counter and accommodate this white, feminized memory-making crusade; documents the role of Natchez white men in the masculine formation of a white supremacy–based memory that the city’s white women eventually assumed, feminized, and controlled; and explores the role played by professional and amateur photographers in shaping a view of the town’s history and memory that left an indelible mark on the consciousness of its residents, both black and white. Falck ends with a cogent epilogue that ties present-day memory-making efforts to the city’s past, highlighting the deeply rooted challenges white and black progressives confronted in trying to replace a mythic and racist memory with a more inclusive and somewhat critical tourist-minded presentation of the city’s history."