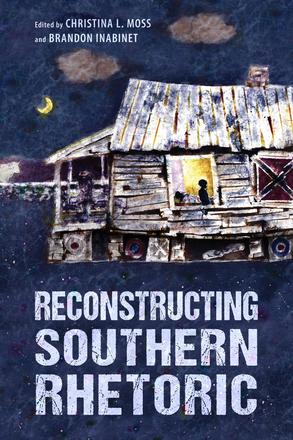 Southern rhetoric is communication’s oldest regional study. During its initial invention, the discipline was founded to justify the study of rhetoric in a field of white male scholars analyzing significant speeches by other white men, yielding research that added to myths of Lost Cause ideology and a uniquely oratorical culture. Reconstructing Southern Rhetoric takes on the much-overdue task of reconstructing the way southern rhetoric has been viewed and critiqued within the communication discipline. The collection reveals that southern rhetoric is fluid and migrates beyond geography, is constructed in weak counterpublic formation against legitimated power, creates a region that is not monolithic, and warrants activism and healing.

Contributors to the volume examine such topics as political campaign strategies, memorial and museum experiences, television and music influences, commemoration protests, and ethnographic experiences in the South. The essays cohesively illustrate southern identity as manifested in various contexts and ways, considering what it means to be a part of a region riddled with slavery, Jim Crow laws, and other expressions of racial and cultural hierarchy. Ultimately, the volume initiates a new conversation, asking what southern rhetorical critique would be like if it included the richness of the southern culture from which it came.

"Reconstructing Southern Rhetoric makes important contributions to the various ways in which southern identity is communicated to a variety of audiences. Each chapter addresses the impact that race has on cultural conceptualizations of what it means to be from the southern US. This book is exceptionally timely and essential. Collectively, these chapters contribute to efforts that scholars are making in advancing our public discourse about race. "