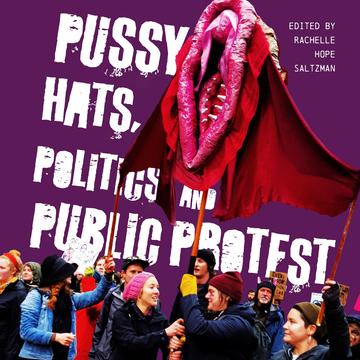 The 2016 US presidential campaign and its aftermath provoked an array of protests notable for their use of humor, puns, memes, and graphic language. During the campaign, a video surfaced of then-candidate Donald Trump’s lewd use of the word “pussy”; in response, many women have made the issue and the term central to the public debate about women’s bodies and their political, social, and economic rights. Focusing on the women-centered aspects of the protests that started with the 2017 Women’s March, Pussy Hats, Politics, and Public Protest deals with the very public nature of that surprising, grassroots spectacle and explores the relationship between the personal and the political in the protests.

Contributors to this edited collection use a folkloristic lens to engage with the signs, memes, handmade pussy hats, and other items of material culture that proliferated during the march and in subsequent public protests. Contributors explore how this march and others throughout history have employed the social critique functions and features of carnival to stage public protests; how different generations interacted and acted in the march; how perspectives on inclusion and citizenship influenced and motivated participation; how women-owned businesses and their dedicated patrons interacted with the election, the march, and subsequent protests; how popular belief affects actions and reactions, regardless of some objective notion of truth; and how traditionally female crafts and gifting behavior strengthened and united those involved in the march.

"Pussy Hats, Politics, and Public Protest is a truly important and timely intervention that illustrates the many ways folklore scholarship can provide a valuable lens to understand politics and the public sphere. It will make a significant contribution to scholarship at the intersection of gender, politics, and folklore, as well as to conversations around kitchen tables, in neighborhood coffee shops, and in political forums."

"Pussy Hats, Politics, and Public Protest is a necessary and compelling addition to folkloristics, the larger cultural conversation of the Trumpian era, and the critical ways in which creative expression is being employed in protests and, to a lesser degree, everyday life. This critically important work brings the conversation about festival, material culture, narrative, and other folkloric forms into the current political landscape in a profound and moving way."