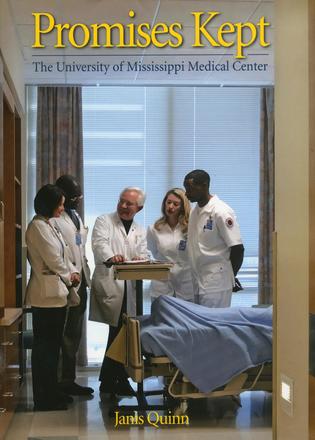 The University of Mississippi Medical Center

With very little money but with a groundswell of support from all sectors of the state, the two-year medical school at the University of Mississippi in Oxford became the University of Mississippi Medical Center in Jackson in 1955. Including more than fifty photographs, Promises Kept traces the development of the medical center from one school and two hospital wings to a major center for professional health education with four hospitals, five schools, a work force of more than 7,500 and a $650 million annual budget.

In the 1960s, medical center leadership faced the challenge of maintaining stability in a rapidly changing social order and accomplishing the peaceful racial integration among both patients and employees. Though often strapped for cash and amid crises and conflicts, the small medical center in the nation's poorest state stayed true to its mission. This history details the careers of medical center leaders who were dedicated to assuring that the institution never deviated from its focus on healing the sick, providing health professionals for Mississippi, and researching new ways of understanding and treating illness.

The center nurtured the careers of two of the most important individuals in modern medicine, James D. Hardy and Arthur C. Guyton. In 1964 Hardy performed the world's first heart transplant three years before Christiaan Barnard. In 1956, Guyton published his Textbook of Medical Physiology, which to this day remains the most widely used textbook in the field, and the standard physiology text around the world.

Using archival records, photographs, and other documents, Promises Kept: The University of Mississippi Medical Center is an overview of one of the state's most significant institutions.