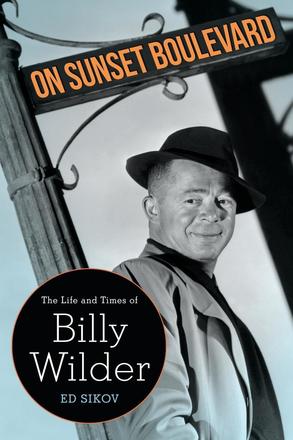 The Life and Times of Billy Wilder

With a new epilogue, the definitive biography of one of the world’s greatest filmmakers

On Sunset Boulevard, originally published in 1998, describes the life of acclaimed filmmaker Billy Wilder (1906-2002), director of such classics as Sunset Boulevard, The Lost Weekend, The Seven Year Itch, and Sabrina. This definitive biography takes the reader on a fast-paced journey from Billy Wilder's birth outside of Krakow in 1906 to Vienna, where he grew up, to Berlin, where he moved as a young man while establishing himself as a journalist and screenwriter, and triumphantly to Hollywood, where he became as successful a director as there ever was.

Double Indemnity, Sunset Boulevard, Some Like It Hot, and The Apartment--Wilder's cinematic legacy is unparalleled. Not only did he direct these classics and twenty-one other films, he co-wrote all of his own screenplays. Volatile, cynical, hilarious, and driven, Wilder arrived in Hollywood an all-but-penniless refugee who spoke no English. Ten years later he was calling his own shots, and he stayed on top of the game for the next three decades. Wilder battled with Humphrey Bogart, Marilyn Monroe, Bing Crosby, and Peter Sellers; kept close friendships with William Holden, Audrey Hepburn, Jack Lemmon, and Walter Matthau; amassed a personal fortune by way of blockbuster films and shrewd investments in art (including Picassos, Klees, and Mirós); and won Oscars--yet Wilder, ever conscious of his thick accent, always felt the sting of being an outsider.

On Sunset Boulevard traces the course of a turbulent but fabulous life, both behind the scenes and on the scene, from Viennese cafes and Berlin dance halls in the twenties to the Hollywood soundstages of the forties and the on-location shoots of the fifties and sixties. Crammed with Wilder's own caustic wit, On Sunset Boulevard reels out the story of one of cinema's most brilliant and prolific talents.

By naming this . . . biography after the savagely humorous 1950 classic, Sikov invites a risky comparison--and pulls it off with a broad, well-documented overview of Wilder's life and work. Considering Wilder 'the fastest, funniest, meanest mind in Hollywood,' Sikov admires his subject without succumbing to reverence. Wilder is an infamous raconteur, and Sikov wisely lets him hold forth on his self-made legend, including his acerbic assessments of fellow Hollywood players, his outrageous and wrenching accounts of Europe before and after WWII, and his steely insights into American culture. Though the preface acknowledges that the work is 'unauthorized,' it presents so many Wilder quotes (of Raymond Chandler, 'I was all that he hated about Hollywood'; of Audrey Hepburn, 'After so many drive-in waitresses . . . here is class') and authoritative accounts of his comings and goings that it reads almost as if Wilder's own hand were behind it. The book's film criticism works best as a tool for gleaning Wilder's sensibility from his scripts and direction. The often irascible, always witty Wilder emerges from these pages as shrewd, eminent, and, especially in comparison with today's tepid Hollywood fare, daringly authentic.

Sikov's unauthorized biography of moviemaker Billy Wilder is better written than Kevin Lally's Wilder Times (1996). Otherwise, it is remarkably similar, despite Lally's greater access to Wilder (Sikov confesses he shared Wilder's reaction to the prospect of interviewing for the book: 'the idea . . . made him want to throw up'). Both books concentrate on Wilder's movies and their humorous cynicism and sullied idealism about life and love. Sikov places greater emphasis on Wilder's seeming mission to confront American pretensions to virtue with the seamy truth as he saw it; the central Wilder film, then, is the bitter Ace in the Hole, in which an opportunistic reporter transforms an accident into a media circus. Sikov also stresses Wilder's obsession with sexual vulgarity and depicts him as flouting respectability because he felt—prophetically, it turned out—that greater sexual candor onscreen was inevitable as well as honest. Like Lally, Sikov doesn't visually analyze Wilder's movies, and he can't make Wilder personally appealing, either. Still, Sikov's is the better overall appreciation of the monstrously amusing filmmaker.

A careful and thorough researcher, Sikov has pieced together more about Wilder's European years than the previous biographers. But lacking Wilder's cooperation, he has had to rely on other biographers and interviewers for a sense of the man himself, and none of them has penetrated through to his emotional core.