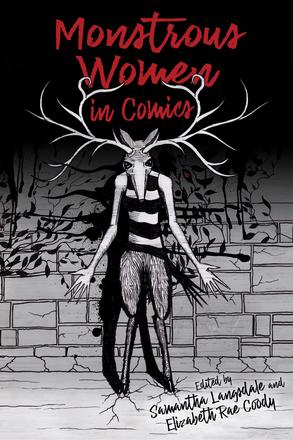 Monsters seem to be everywhere these days, in popular shows on television, in award-winning novels, and again and again in Hollywood blockbusters. They are figures that lurk in the margins and so, by contrast, help to illuminate the center—the embodiment of abnormality that summons the definition of normalcy by virtue of everything they are not.

Samantha Langsdale and Elizabeth Rae Coody’s edited volume explores the coding of woman as monstrous and how the monster as dangerously evocative of women/femininity/the female is exacerbated by the intersection of gender with sexuality, race, nationality, and disability. To analyze monstrous women is not only to examine comics, but also to witness how those constructions correspond to women’s real material experiences.

Each section takes a critical look at the cultural context surrounding varied monstrous voices: embodiment, maternity, childhood, power, and performance. Featured are essays on such comics as Faith, Monstress, Bitch Planet, and Batgirl and such characters as Harley Quinn and Wonder Woman.

This volume probes into the patriarchal contexts wherein men are assumed to be representative of the normative, universal subject, such that women frequently become monsters.

"The fifteen essays are highly readable and richly varied in approach. . . . This is a landmark volume in transnational feminist comics studies that needs to be on the shelf of every comics scholar. "

- Candida Rifkind, Inks: The Journal of the Comics Studies Society