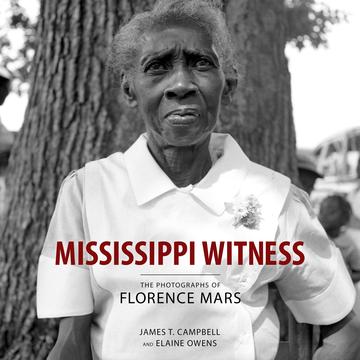 The Photographs of Florence Mars

The singular vision of a courageous Mississippi activist

In June 1964, Neshoba County, Mississippi, provided the setting for one of the most notorious crimes of the civil rights era: the Klan-orchestrated murder of three young voting-rights workers, James Chaney, Michael Schwerner, and Andrew Goodman. Captured on the road between the towns of Philadelphia and Meridian, the three were driven to a remote country crossroads, shot, and buried in an earthen dam, from which their bodies were recovered after a forty-four-day search.

The crime transfixed the nation. As federal investigators and an aroused national press corps descended on Neshoba County, white Mississippians closed ranks, dismissing the men’s disappearance as a “hoax” perpetrated by civil rights activists to pave the way for a federal “invasion” of the state. In this climate of furious conformity, only a handful of white Mississippians spoke out. Few did so more openly or courageously than Florence Mars. A fourth-generation Neshoban, Mars braved social ostracism and threats of violence to denounce the murders and decry the climate of fear and intimidation that had overtaken her community. She later recounted her experiences in Witness in Philadelphia, one of the classic memoirs of the civil rights era.

Though few remember today, Mars was also a photographer. Shocked by the ferocity of white Mississippians’ reaction to the Supreme Court’s 1954 ruling against racial segregation, she bought a camera, built a homemade darkroom, and began to take pictures, determined to document a racial order she knew was dying. Mississippi Witness features over one hundred of these photographs, most taken in the decade between 1954 and 1964, almost all published here for the first time. While a few depict public events—Mars photographed the 1955 trial of the murderers of Emmett Till—most feature private moments, illuminating the separate and unequal worlds of black and white Mississippians in the final days of Jim Crow.

Powerful and evocative, the photographs in Mississippi Witness testify to the abiding dignity of human life even in conditions of cruelty and deprivation, as well as to the singular vision of one of Mississippi’s—and the nation’s—most extraordinary photographers.

Ultimately, [her photographs] represented one of her greatest achievements, offering a candid insider’s take on life in the waning years of the Jim Crow South that alters our perceptions about racism and segregation.

Mississippi Witness is a riveting collection of photographs taken by my good friend Florence Mars. Through Flossy’s unique lens, she captured powerful images of the civil rights movement. She was a wonderful, heroic figure, and I am thrilled that this book has been published to finally share her amazing story with the world. Flossy was able to use her camera to collect and express emotions which were not easily translatable. Quite simply, her pictures spoke volumes. This book is an important volume on this period of our nation’s history.

In 2004, I visited Florence Mars at her home in Philadelphia, Mississippi, the town in which my older brother Andrew and his comrades James Chaney and Michael Schwerner were murdered by Ku Klux Klansmen forty years before. Burdened by disease, she struggled to speak clearly, yet her courage and commitment to the self-evident truth that all people are created equal were undimmed. In these photographs, most taken in the decade between 1954 and 1964, she captures both the horror and the haunting beauty of rural Mississippi in the last days of legal segregation.

Mississippi Witness: The Photographs of Florence Mars is an amazing gift of rarely seen images—rich, haunting, and complex—that capture the tenor and the tint of Philadelphia, Mississippi, in the early years of the civil rights era. Florence Mars’s beautiful and startling photographs capture the daily rhythms of Neshoba County, Mississippi, at a time of transformation and racial struggle. Thanks to the work of Campbell and Owens, we have access to work that enriches, surprises, humanizes, confounds, clarifies, and enhances the visual history of a region in the throes of change. This is an important and needed publication.

- Lonnie G. Bunch, founding director of the Smithsonian’s National Museum of African American History and Culture and coauthor of Memories of the Enslaved: Voices from the Slave Narratives

In a striking compendium of images, text, and scholarly research, Mississippi Witness quietly and beautifully captures what Mars saw. This book will interest students and scholars, photographers and activists, and all those who are committed to tracing the arc of American social justice.

- Laura Wexler, professor at Yale University and author of Tender Violence: Domestic Visions in an Age of U.S. Imperialism and “A More Perfect Likeness”: Frederick Douglass and the Image of the Nation