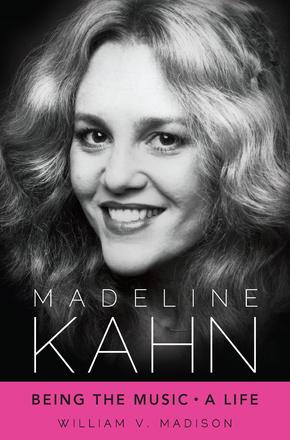 Being the Music, A Life

Best known for her Oscar-nominated roles in the smash hits Paper Moon and Blazing Saddles, Madeline Kahn (1942–1999) was one of the most popular comedians of her time—and one of the least understood. In private, she was as reserved and refined as her characters were bold and bawdy. Almost a Method actor in her approach, she took her work seriously. When crew members and audiences laughed, she asked why—as if they were laughing at her—and all her life she remained unsure of her gifts.

William V. Madison examines Kahn's film career, including not only her triumphs with Mel Brooks and Peter Bogdanovich, but also her overlooked performances in The Adventure of Sherlock Holmes' Smarter Brother and Judy Berlin, her final film. Her work in television—notably her sitcoms—also comes into focus. New York theater showered her with accolades, but also with remarkably bad luck, culminating in a disastrous outing in On the Twentieth Century that wrecked her reputation on Broadway. Only with her Tony-winning performance in The Sisters Rosensweig, fifteen years later, did Kahn regain her standing.

Drawing on new interviews with family, friends, and such colleagues as Lily Tomlin, Carol Burnett, Gene Wilder, Harold Prince, and Eileen Brennan, as well as archival press and private writings, Madison uncovers Kahn's lonely childhood and her struggles as a single woman working to provide for her erratic mother. Above all, Madison reveals the paramount importance of music in Kahn's life. A talented singer, she entertained offers for operatic engagements long after she was an established Hollywood star, and she treated each script as a score. As Kahn told one friend, her ambition was “to be the music. ”

By 1974, Kahn was by any measure a star. . . . But then, according to William V. Madison in Madeline Kahn: Being the Music, A Life, it all disappeared. The talent didn't disappear, mind you; but it seems that Kahn's faith in herself, which was never strong, deserted her altogether. . . . The book, mind you, is not depressing; it is illuminating. . . . Madison has followed her career step-by-step; every job seems to be discussed, including guest shots on television series.

A searching and compassionate study

William V. Madison's detailed new biography . . . is a sad book; Kahn's career had more disappointments than triumphs, and her personal life was dominated by her parasite of a mother. But it reads well. Madison is adept at describing Kahn's performances, and he adores his subject and evinces great compassion for her. . . . Madison chronicles her life so lovingly that readers get a real fix on who she was and what made her so hilarious.

Madison, a former CBS News producer, gives comedian Madeline Kahn (1942-1999) the star treatment and provides fans with an in-depth, heartfelt look into her too-brief life. . . . [He] offers a warm portrait of Kahn and ends on an upbeat note, observing that Kahn experienced overdue romantic and professional fulfillment in her last years, including winning a Tony Award and acting in the award-winning Judy Berlin for her final film.

A superior portrait of a talented star

For everyone who found her an enigmatic delight on stages and screens, the book is a resonant must-read, evoking its subject and the golden age of theater and film in which she lived.

Actresses and female singers must read this book to get an idea of the kind of adversity that Madeline Kahn faced in her career and that they may face too. It's perfectly, absolutely normal to sing and dance and play—what's abnormal is trying to make a living from it.

A fine biography, worthy of Madeline's unique talent and contribution

A riveting and unforgettable portrait

Bids to become the surprise biography of the year; a great untold story intriguingly revealed. Superbly researched, digs deep into the life and times of its subject and captures her essence

A genuine and engrossing tribute. . . . I think it would even make Madeline Kahn smile.

Madeline Kahn is the best comic or dramatic actress, the best singer—serious or comic—and the best I've worked with, or known in my life.

Madeline was bright, committed, thoughtful, and one of the most remarkable actresses I have ever worked with. William V. Madison's biography captures Madeline's complexity and finely documents her career and personal life.

- Jane Alexander, actress, author, former chairman of the National Endowment for the Arts, and wildlife conservationist

When I started out in New York, in the late 60's, one of my earliest friends and fellow performers at Upstairs at the Downstairs was the inimitable Madeline Kahn. As young and struggling artists, we bonded as great friends, and remained friends for thirty years. Even back then, I knew her talent would take her far. She was so gifted in so many ways, it's difficult to summarize her genius.

I'm delighted that William V. Madison's book has perfectly captured her irreverent humor as well as all the challenges she faced as a single working woman. Madeline continues to influence younger artists today, and her performances are a treasure for all of us.

- Lily Tomlin, "Below the Belt" revue, Upstairs at the Downstairs