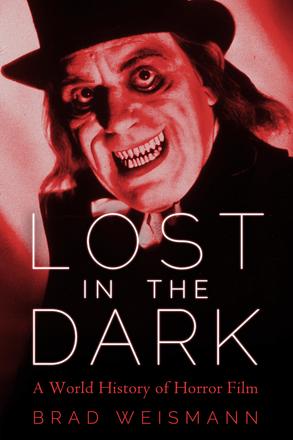 Lost in the Dark

A World History of Horror Film

A comprehensive and fun overview of moviegoers’ favorite genre

Two horror films were nominated for the Academy Award for Best Picture in 2018, and one of them—The Shape of Water—won. Since 1990, the production of horror films has risen exponentially worldwide, and in 2013, horror films earned an estimated $400 million in ticket sales. Horror has long been the most popular film genre, and more horror movies have been made than any other kind. We need them. We need to be scared, to test ourselves, laugh inappropriately, scream, and flinch. We need to get through them and come out, blinking, still in one piece.

Lost in the Dark: A World History of Horror Film is a straightforward history written for the general reader and student that can serve as a comprehensive reference work. The volume provides a general introduction to the genre, serves as a guidebook to its film highlights, and celebrates its practitioners, trends, and stories. Starting with silent-era horror films and ending with 2020’s The Invisible Man, Lost in the Dark looks at decades of horror movies.

"Brad Weismann’s Lost in the Dark: A World History of Horror Film is a fine endeavor in recounting the global impact of horror films, as well as educating readers about their history. . . . Weismenn’s text is an exemplary depiction of the importance and history of the genre and is a must-read for any horror fan. "

"Lost in the Dark: A World History of Horror Film takes you on a tour through the sprawling history of horror, with author Brad Weismann as your very knowledgeable guide. Expansive yet very accessible, it touches on both the highs and lows, the controversial and more, with great insights and observations, making it a thoroughly enjoyable read. It is part reference library, part love affair, and horror fans will enjoy this merging of the two in all its expansive glory. "

"Brad Weismann’s Lost in the Dark is an astonishingly expansive and accessible primer on the history of horror movies, tracing a path from its earliest origins to the most current offerings. Spanning the globe and covering more subgenres than you can count on two hands, this is an essential addition to any horror lover’s reference library. Whether you’re a seasoned genre vet or only just starting your journey, Lost in the Dark offers up an entire world’s worth of fright films waiting for you to discover. "

- Stacie Ponder, writer behind the long-running horror blog Final Girl, columnist for Rue Morgue magazine, and cohost of the Gaylords of Darkness podcast

"The book is a worthy addition to the resource library of any horror film enthusiast or student of (horror) cinema."

"Joining many recent books recounting the long and rich history of the horror film, this volume aims for inclusiveness and accessibility. In the book's twenty-four chapters Weismann traces, in roughly chronological order, the international development of horror cinema from the late nineteenth century to the present day. Whereas some histories of the genre focus on Anglo-American movies to the exclusion of films from Continental Europe, Asia, and elsewhere, Weismann devotes ample space to the output of countries like Italy, Spain, Japan, and Korea and offers a fuller picture of what is truly a global phenomenon."

"From biblical ghost stories to the pioneering Haunted Castle to the Oscar-winning Get Out, Lost in the Dark: A World History of Horror Film is the definitive history of horror. The book dissects horror’s growth, step-by-step, from hiding behind dark curtains into the zeitgeist of respected art. People have a need for horror, a need to be scared. The art of horror is just as important culturally worldwide as it is on an individually personal level. Love it or hate it, everyone has an opinion about horror. Brad Weismann’s book shows exactly why horror ignites that fire in us all."

"Brad Weismann’s Lost in the Dark: A World History of Horror Film is both readable and comprehensive. It is an essential resource for genre fans as well as scholars. I adopted this text in a film studies course, and it has proven to be immensely valuable for my students. Weismann's knowledge of the history of horror films across all subgenres is extensive, and the structure of the book is reader friendly and accessible. I thought I knew a lot about horror film before reading this book, but I learned a lot that was new to me and added many films to my watch list as a result. The text also has a subtle sense of humor and informality of voice that adds to its appeal."