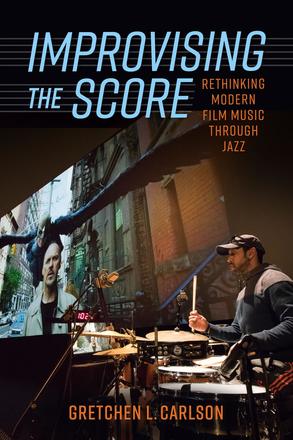 A vivid, behind-the-scenes investigation into the integrative collaborations between contemporary jazz musicians and filmmakers

On December 4, 1957, Miles Davis revolutionized film soundtrack production, improvising the score for Louis Malle’s Ascenseur pour l’échafaud. A cinematic harbinger of the French New Wave, Ascenseur challenged mainstream filmmaking conventions, emphasizing experimentation and creative collaboration. It was in this environment during the late 1950s to 1960s, a brief “golden age” for jazz in film, that many independent filmmakers valued improvisational techniques, featuring soundtracks from such seminal figures as John Lewis, Thelonious Monk, and Duke Ellington. But what of jazz in film today?

The first book of its kind, this study examines jazz artists’ work in film from a sociological perspective, offering rich, behind-the-scenes analyses of their unique collaborative relationships with filmmakers. It investigates how jazz artists negotiate their own “creative labor,” examining the tensions between improvisation and the conventionally highly regulated structures, hierarchies, and expectations of filmmaking. Grounded in personal interviews and detailed film production analysis, Improvising the Score illustrates the dynamic possibilities of integrative artistic collaborations between jazz, film, and other contemporary media, exemplifying its ripeness for shaping and invigorating twenty-first-century arts, media, and culture.

"This book represents a substantial contribution to the growing discipline of film music studies, not to mention jazz studies. I have always been intrigued by films such as Birdman, Afterglow, and Mo’ Better Blues, but Carlson has found new ways to make them even more fascinating. "

- Krin Gabbard, author of Better Git It in Your Soul: An Interpretive Biography of Charles Mingus

"Carefully researched and engagingly written, Gretchen Carlson’s Improvising the Score is a most welcome addition to contemporary jazz studies. With a persistent focus on music practice, Carlson’s various case studies reveal important insights about jazz’s unique relationships to film and media. Interdisciplinary in the best sense of the word, Improvising the Score is sure to be a widely read and highly influential work of scholarship."

- Ken Prouty, associate professor of musicology and jazz studies at Michigan State University and author of Knowing Jazz: Community, Pedagogy, and Canon in the Information Age

- Emilio Audissino, author of Film/Music Analysis and coeditor of Cinema Changes: Incorporations of Jazz in the Film Soundtrack

"At long last, an account of the transformative entanglement between jazz and film. Carlson deftly weaves together sociological, ethnographic, legal, and technological understandings of creative labor—precisely reading texts, then widening out to broader issues in film and media. This is a book that busts open the canon and, in doing so, imagines a better future for jazz studies and music in film."

"The issues it discusses are fascinating ones, and it's a very worthwhile read."

"Comprising case studies of four films—bookended by an introduction and a conclusion in which Carlson lays out her arguments and synthesizes her insights—this book upends the idea that scoring films is ancillary or secondary to filmmaking. . . . Carlston's clear prose is very readable. Highly recommend."