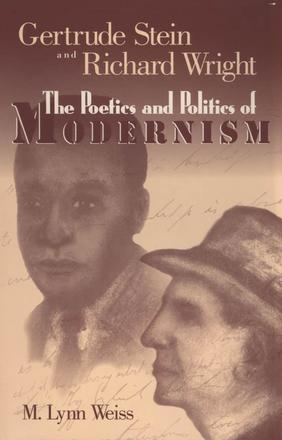 The Poetics and Politics of Modernism

After the Second World War, Gertrude Stein asked a friend's support in securing a visa for Richard Wright to visit Paris.

The brief, little-noted friendship of Stein and Wright began in 1945 with a letter. Over the next fifteen months, the two kept up a lively correspondence which culminated in Wright's visit to Paris in May 1946 and ended with Stein's death a few months later.

Gertrude Stein and Richard Wright began their careers as marginals within marginalized groups, and their desire to live peacefully in unorthodox marriages led them away from America and into permanent exile in France. Still, the obvious differences between them—in class, ethnic and racial origins, and in artistic expression—beg the question: What was there to talk about? This question opens a window onto each writer's meditations on the influence of racial, ethnic, national origins on the formation of identity in a modern and post-modern world.

The intuitive and intellectual affinities between Stein and Wright are illuminated in several works of nonfiction. Stein's Paris France and Wright's Pagan Spain are meditations on expatriation and creativity. Their so-called homecoming narratives—Stein's Everybody's Autobiography and Wright's Black Power—examine concepts of racial and national identity in a post-modernist world. Respectively, in Lectures in America and White Man, Listen!, Stein and Wright outline the ways in which the poetics and politics of modernism are inextricably bound.

At the close of the twentieth century, the meditations of Stein and Wright on the protean quality of individual identity and its artistic, social, and political expression explore the most prescient and pressing issues of our time and beyond.