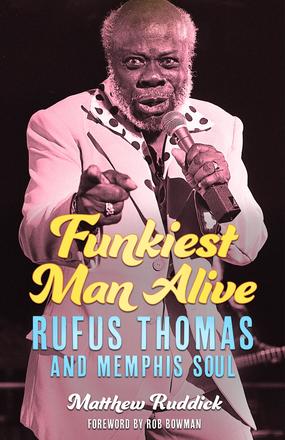 Rufus Thomas may not be a household name, but he is widely regarded as the patriarch of Memphis R&B, and his music influenced three generations. His first singles in the early 1950s were recorded as blues transitioned into R&B, and he was arguably one of the founding fathers of early rock ’n’ roll. In the early 1960s, his songs “The Dog” and “Walking the Dog” made a huge impact on the emerging British “mod” scene, influencing the likes of the Georgie Fame, the Rolling Stones, and the Who. And in the early 1970s, Thomas rebranded himself as the “funkiest man alive” and recorded funk classics that were later sampled by the likes of Public Enemy, Missy Elliot, and the Wu-Tang Clan.

In Funkiest Man Alive: Rufus Thomas and Memphis Soul, Matthew Ruddick reveals the amazing life and career of Thomas, who started as a dancer in the minstrel shows that toured the South before becoming one of the nation’s early African American disc jockeys, and then going on to record the first hit singles for both Chess Records and Stax Records. Ruddick also examines the social fabric of the city of Memphis, analyzing the factors behind the vast array of talent that appeared in the late 1950s, with singers like Isaac Hayes, William Bell, Maurice White (Earth, Wind & Fire), and Thomas’s older daughter, Carla Thomas, all emerging from the tightly knit African American community. He also tells the story of Memphis-based Stax Records, one of the nation’s leading R&B record labels. From the earliest blues, the segregated minstrel shows, and the birth of rock ’n’ roll through to the emergence of R&B and funk, Rufus Thomas saw it all.

"By any measuring stick, Rufus Thomas made a gigantic contribution to American music. He has long deserved a full biography. Thanks to Matthew Ruddick, that biography is now in your hands."