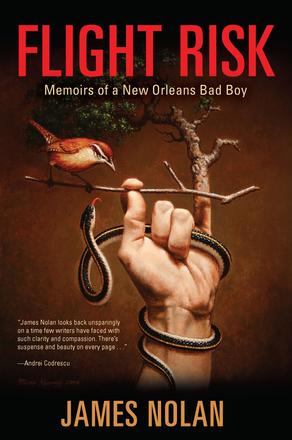 “James Nolan looks back unsparingly on a time few writers have faced with such clarity and compassion. There’s suspense and beauty on every page. . . . ” —Andrei Codrescu

Flight Risk takes off as a page-turning narrative with deep roots and a wide wingspan. James Nolan, a fifth-generation New Orleans native, offers up an intimate portrait both of his insular hometown and his generation's counterculture. Flight runs as a theme throughout the book, which begins with Nolan’s escape from the gothic mental hospital to which his parents committed the teenaged poet during the tumult of 1968. This breakout is followed by the self-styled revolutionary’s hair-raising flight from a Guatemalan jail, and years later, by the author’s bolt from China, where he ditched his teaching position and collectivist ideals. These Houdini-like feats foreshadow a more recent one, how he dodged biblical floods in a stolen school bus three days after Hurricane Katrina hit New Orleans.

Nolan traces these flight patterns to those of his French ancestors who fled to New Orleans in the mid-nineteenth century, established a tobacco business in the French Quarter, and kept the old country alive in their Creole demimonde. The writer describes the eccentric Seventh Ward menagerie of the extended family in which he grew up, his early flirtation with extremist politics, and a strong bond with his freewheeling grandfather, a gentleman from the Gilded Age. Nolan’s quest for his own freedom takes him to the flower-powered, gender-bending San Francisco of the sixties and seventies, as well as to an expatriate life in Spain during the heady years of that nation’s transition to democracy. Like the prodigal son, he eventually returns home to live in the French Quarter, around the corner from where his grandmother grew up, only to struggle through the aftermath of Katrina and the city’s resurrection.

Many of these stories are entwined with the commentaries of a wry flâneur, addressing such subjects as the nuances of race in New Orleans, the Disneyfication of the French Quarter, the numbing anomie of digital technology and globalization, the challenges of caring for aging parents, Creole funeral traditions, how to make a soul-searing gumbo, and what it really means to belong.

A wryly eloquent memoir of world travel and the joys, and difficulties, of returning home.

Nolan's prose is rhythmic, poetic, and a joy to read. It is often poignant, but never sentimental, and is frequently humorous. It is also honest. The author remembers the segregated South, the AIDS epidemic, past lovers alive and dead, and a culture that once cared for its elders at home. How bad is this boy who came home to New Orleans to roost? Readers who participate in James Nolan's journey will find out. And they will enjoy the trip.

James Nolan’s memoir contains enough rock-em sock-em rebelliousness. . . . [He] knows how to grab the reader. . . . Gallivanting across continents, collecting showstopper anecdotes at a breakneck pace, Flight Risk is dense with unimaginable but convincingly-told stories, improbable encounters, and the golden lines that make Nolan’s work such a pleasure to read.

James Nolan is a fifth-generation New Orleanian and has an unmistakable intuition about the city. . . . For those of us who haven’t experienced New Orleans for the last fifty years, Flight Risk is a revealing window to the past.

Flight Risk is more than memoir. It's a turbulent ride. More than the maturing of a generation, this is the tale of a life written in the language of longing and belonging. And James Nolan, New Orleanian to the core, masters the necessary acts of translation between the two.

A knockout! Boomer memoirists will read James Nolan and weep with envy. He's lived larger and wilder than the rest of us, and writes like magic, tossing off a haiku-like aperçu in every paragraph. He also offers the most astute take on racial politics in Louisiana that this white liberal has ever read. Above all, Flight Risk is about Creole New Orleans, the real thing, not the sham version sold to tourists and celebrated by post-Katrina hipsters.

- Jed Horne, retired city editor of the New Orleans Times-Picayune and author of Breach of Faith: Hurricane Katrina and the Near Death of a Great American City

Hail James Nolan. He sure can tell a story and build it up to a climax.

James Nolan's memoir is vivid, entertaining, and utterly memorable, one of the most enjoyable reads that has come my way for a very long time. The picture he paints of the city he inhabits is unforgettable. New Orleans is fortunate indeed to have such a magnificent writer to record its fragile and extraordinary culture.

. . . Flight Risk chronicles my generation and graces New Orleans with one of its most enduring literary portraits. Best of all, this memoir provides the reader with a powerful tool for forgiveness between the generations.

- Andrei Codrescu, NPR commentator and author of The Art of Forgetting