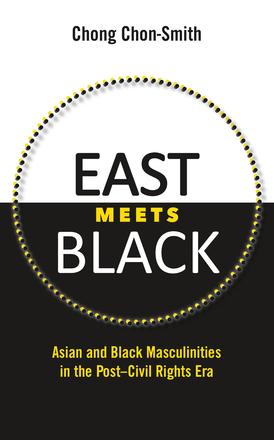 Asian and Black Masculinities in the Post-Civil Rights Era

An interrogation of the harmful, binary stereotypes leveled against black and Asian men

East Meets Black examines the making and remaking of race and masculinity through the racialization of Asian and black men, confronting this important white stratagem to secure class and racial privilege, wealth, and status in the post-civil rights era. Indeed Asian and black men in neoliberal America are cast by white supremacy as oppositional. Through this opposition in the US racial hierarchy, Chong Chon-Smith argues that Asian and black men are positioned along binaries brain/body, diligent/lazy, nerd/criminal, culture/ genetics, student/convict, and technocrat/athlete--in what he terms "racial magnetism. "

Via this concept, East Meets Black traces the national conversations that oppose black and Asian masculinities, but also the Afro-Asian counterpoints in literature, film, popular sport, hip-hop music, performance arts, and internet subcultures. Chon-Smith highlights the spectacle and performance of baseball players such as Ichiro Suzuki within global multiculturalism and the racially coded controversy between Yao Ming and Shaquille O'Neal in transnational basketball. Further, he assesses the prominence of martial arts buddy films such as Romeo Must Die and Rush Hour that produce Afro-Asian solidarity in mainstream Hollywood cinema. Finally, Chon-Smith explores how the Afro-Asian cultural fusions in hip-hop open up possibilities for the creation of alternative subcultures, to disrupt myths of black pathology and the Asian model minority.

In this first interdisciplinary book on Asian and black masculinities in literature and popular culture, Chon-Smith explores the inspiring, contradictory, hostile, resonant, and unarticulated ways in which the formation of Asian and black racial masculinity has affected contemporary America.

"Instead of isolating African American, Asian, and Asian American communities, Chong Chon-Smith utilizes the nuanced, productive, and interesting frame of 'racial magnetism' as a means to study comparative racializations and desirable cross-pollination between blacks and Asians and Asian Americans. The work by Chon-Smith explores the contemporary moment, post-1960s' civil rights movement era, when US society was interpellated as 'postracial. '"