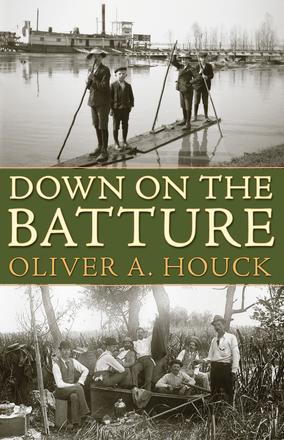 Down on the Batture

By Oliver A. Houck

The lower Mississippi River winds past the City of New Orleans between enormous levees and a rim of sand, mud, and trees called "the batture. " On this remote and ignored piece of land thrives a humanity unique to the region-ramblers, artists, drinkers, fishers, rabbit hunters, dog walkers, sunset watchers, and refugees from Immigration, alimony, and other aspects of modern life.

Author Oliver A. Houck has frequented this place for the past twenty-five years. Down on the Batture describes a life, pastoral, at times marginal, but remarkably fecund and surprising. From this place he meditates on Louisiana, the state of the waterway, and its larger environs. He describes all the actors that have played lead roles on the edge of the mightiest river of the continent, and includes in his narrative plantations, pollution, murder, land grabs, keelboat brawlers, slave rebellions, the Corps of Engineers, and the oil industry.

Houck draws from his experience in New Orleans since the early 1970s in the practice and teaching of law. He has been a player in many of the issues he describes, although he does not undertake to argue them here. Instead, story by story, he uses the batture to explore the forces that have shaped and spell out the future of the region. The picture emerges of a place that---for all its tangle of undergrowth, drifting humanity, shifting dimensions in the rise and fall of floodwater---provides respite and sanctuary for values that are original to America and ever at risk from the homogenizing forces of civilization.